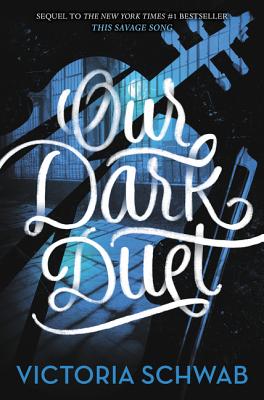 This is book number 2 in the Monsters of Verity series.

Kate Harker is a girl who isn’t afraid of the dark. She’s a girl who hunts monsters. And she’s good at it. August Flynn is a monster who can never be human. No matter how much he once yearned for it. He has a part to play. And he will play it, no matter the cost.

Nearly six months after Kate and August were first thrown together, the war between the monsters and the humans is a terrifying reality. In Verity, August has become the leader he never wished to be, and in Prosperity, Kate has become the ruthless hunter she knew she could be. When a new monster emerges from the shadows—one who feeds on chaos and brings out its victim’s inner demons—it lures Kate home, where she finds more than she bargained for. She’ll face a monster she thought she killed, a boy she thought she knew, and a demon all her own.

A gorgeously written dark fantasy from New York Times–bestselling author Victoria Schwab, and one to hand to fans of Holly Black, Laini Taylor, and Maggie Stiefvater.

Victoria Schwab is the author of the #1 New York Times bestseller This Savage Song and its best-selling sequel, Our Dark Duet. She is also the author of the middle grade trilogy beginning with City of Ghosts. Under the name V. E. Schwab, she has written the best-selling adult fantasy Shades of Magic trilogy and the duology Vicious and Vengeful. When she's not haunting Paris streets or trudging up English hillsides, she lives in Nashville, Tennessee, and is usually tucked in the corner of a coffee shop, dreaming up monsters. www.veschwab.com

“If This Savage Song was a tense exploration of human nature, this sequel is a reckoning....Schwab folds questions of identity, morality, and judgment into her stunningly crafted narrative. ...readers will be hard-pressed to put this action-driven finale down.”
— Booklist (starred review)

“The breakneck packing of the climactic latter half eventually resolves into a poignant ending. ...Schwab’s style is on point, as always. Happily, the many ardent fans waiting for this volume...[will] delight in the feels.”
— Kirkus Reviews

“Alternating between [Kate and August’s] immediate, propulsive perspectives, this sequel’s narrative reveals that each is still hunting the violence-created monsters that plague their alternate United States. ...Suspenseful action sequences are well paced, with affecting moments of understanding and tenderness, building to a satisfying ending.”
— Horn Book Magazine

“Masterly writing, a fast-moving plot, and just the right amount of bittersweet romance make this book hard to put down. A necessary first purchase for all teen collections.”
— School Library Journal

“Explosive . . . Be prepared for a breakneck pace, new monsters, darkness, and all the feels.”
— Brightly