Pieces of Her: A Novel (Hardcover) 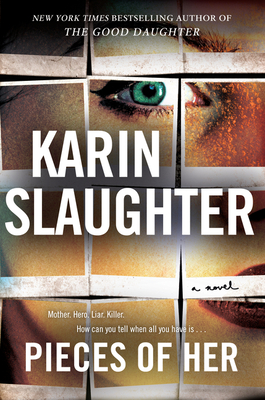 By Karin Slaughter
$30.79
Email or call for price.

Mother. Hero. Liar. Killer. How can you tell when all you have is... Pieces of Her

But all that changes when a trip to the mall explodes into violence and Andrea suddenly sees a completely different side to Laura. Because it turns out that before Laura was Laura, she was someone completely different. For nearly thirty years she’s been hiding from her previous identity, lying low in the hope that no one would ever find her. But now she’s been exposed, and nothing will ever be the same again.

The police want answers and Laura’s innocence is on the line, but she won’t speak to anyone, including her own daughter. Andrea is on a desperate journey following the breadcrumb trail of her mother’s past. And if she can’t uncover the secrets hidden there, there may be no future for either one of them. . . .

Karin Slaughter is one of the world’s most popular and acclaimed storytellers. Published in 120 countries with more than 40 million copies sold across the globe, her twenty-one novels include the Grant County and Will Trent books, as well as the Edgar-nominated Cop Town and the instant New York Times bestselling stand-alone novels Pretty Girls, The Good Daughter, and Pieces of Her. Slaughter is the founder of the Save the Libraries project—a nonprofit organization established to support libraries and library programming. A native of Georgia, she lives in Atlanta. Her standalone novel Pieces of Her is in production with Netflix, starring Toni Collette, and the Grant County and Will Trent series are in development for television.

“All of Slaughter’s books... are satisfyingly surprising and plausible, but it’s Slaughter’s prodigious gifts of characterization that make her stand out among thriller writers.... Slaughter’s satirical touches are as deft as her grimmer renditions of real life.”
— Washington Post

“[Slaughter’s] talent for writing convincingly flawed yet sympathetic characters is in high relief here... Readers will find themselves totally immersed in the suspenseful, alternating story lines and won’t want either of them to end.”

— Booklist (starred review) on Pieces of Her