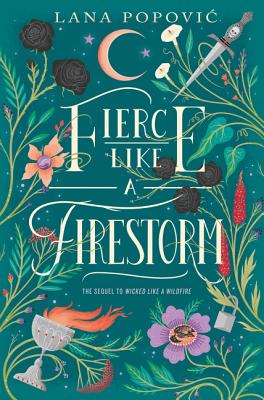 “Lush. Delicious. Bewildering. And darkly magical. Popovic has created a world that you tumble into from the very first words and wish you could stay in forever.” —Evelyn Skye, author of The Crown's Game

In the bewitching conclusion to Lana Popovic’s sumptuous and romantic teen fantasy duology, perfect for fans of Holly Black and Leigh Bardugo, Malina must rescue her twin sister from a magical power more dangerous than Death.

Twin sisters Iris and Malina thought they knew how to reverse the ancient curse that haunts their line, the spell that destines them to use their gleams—unique forms of beauty-manipulating magic—to entice and enchant none other than Death himself. But both sisters thought wrong.

Instead of ending the wicked bargain with the power of her infinite bloom, Iris is taken to an uncanny realm between this world and the next. Only, unlike all of Death’s companions before, Iris’s body goes on the one-way journey along with her soul, arriving in a kingdom never meant to sustain a living girl.

Left behind, Lina searches for a way to save Iris. But as Lina unearths the dark secrets that bind her family and Iris tries to outwit Death on his own terrain, a power resurfaces that even Mara, the original witch mother, fears.

Now both sisters must learn to fully embrace their gleams—or else they’ll truly lose each other forever.

Lana Popović studied psychology and literature at Yale University and law at Boston University. She is a graduate of the Emerson College publishing and writing program and works as a literary agent with Chalberg & Sussman, specializing in YA. Her books include Wicked Like a Wildfire and Fierce Like a Firestorm.

Lana was born in Serbia and spent her childhood summers surrounded by the seaside and mountain magic of Montenegro. She lived in Bulgaria, Hungary, and Romania before moving to the United States, where she now calls Boston home, subsisting largely on cake, eyeliner, and aerial yoga. Visit Lana at www.lanapopovicbooks.com or follow her on Twitter @LanaPopovicLit.

“Fans of Holly Black, Melissa Marr, and Jackson Pearce will gravitate toward [Popoviç’s] luxe, lovely style, which makes this sequel a must.”
— Booklist Online

Praise for WICKED LIKE A WILDFIRE: “Lush. Delicious. Bewildering. And darkly magical. Popovic has created a world that you tumble into from the very first words and wish you could stay in forever.”
— Evelyn Skye, New York Times bestselling author of The Crown’s Game

“Wicked Like a Wildfire was like devouring a succulent fairy fruit-it will rob your time, settle into your dreams, and leave you starving for more.”
— Roshani Chokshi, New York Times bestselling author of The Star-Touched Queen

“This sensory-rich debut and series opener highlights the mysteries of life, death, and love for modern twin witches.”
— Kirkus Reviews

“Readers will be captivated by [Popovic’s] entrancing writing, evocative setting, and distinctive supernatural worldbuilding, and will eagerly await the second book in this planned duology.”
— Publishers Weekly

“Atmospheric and often sensual, this first in a duology is a slow-burning fairy tale about the power of love and the bonds between siblings. Patient readers will find much to savor.”
— Booklist