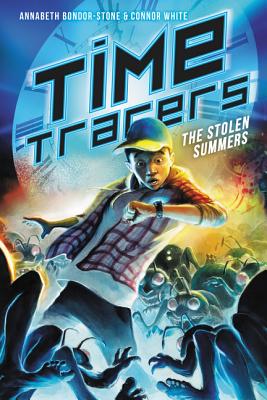 Twelve-year-old Taj Carter is on a high-stakes mission to track down the time thieves who stole his entire summer vacation—before they steal all the fun on earth! It’s an all-new action-packed series by the authors of the critically acclaimed Shivers! series, Annabeth Bondor-Stone and Connor White.

Taj Carter is the kind of kid who has a good time, all the time. He’s the class clown. The best friend. The cool big brother. That is, until he wakes up on what’s supposed to be the first day of vacation only to find that his entire summer is gone!

But if that seems like a total nightmare, it’s actually the least of Taj’s worries. He discovers that the time didn’t just fly by, it was stolen. By time thieves! And now they’re after way more than just one kid’s summer break. They’re after all the fun on earth, and it turns out Taj is the key to getting it. He has a target on his back and not a moment more to lose. It’s up to Taj to find a way to get back his summer—and to save the world from falling completely off the clock.

Authors of the Shivers! series Annabeth Bondor-Stone and Connor White fiercely defend the right to have fun in the first book of their all-new action-adventure series, Time Tracers.

Annabeth Bondor-Stone is the coauthor of Time Tracers and the Shivers the Pirate series. She is a producer for the Story Pirates and a mentor with WriteGirl, an organization that empowers teen girls through creative writing. Her plays have been produced in Chicago, Los Angeles, and Louisville.

Connor White is the coauthor of Time Tracers and the Shivers the Pirate series. When he is not writing books, Connor is a director and producer for the Story Pirates, an arts organization that teaches kids creative writing, then turns their stories into a sketch comedy show.

“A fast-paced and fun, light read for those who crave sci-fi romps.”
— School Library Journal

“Coauthors Bondor-Stone and White ... blaze new trails with this original concept. Every child having fun always wants more time, and the monsters created here explain where it all goes. A fun, exciting romp for any reader.”
— ALA Booklist