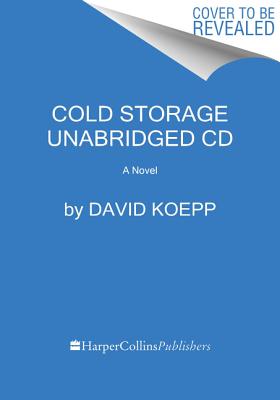 “Meet Cordyceps Novus, a highly adaptable fungus that just wants one thing: to take over the world. After being contained underground for 40 years, conditions are finally perfect for a comeback. Several floors above, two young night-shift security guards decide to track down the source of the mysterious alarm below. David Koepp’s debut novel is both terrifying and humorous — a thrilling combination. After getting an inside look at the growth and spread of this fungus, I will never look at a mushroom the same way again.”
— Mary Salazar, The Country Bookshop, Southern Pines, NC

For readers of Andy Weir and Noah Hawley comes an astonishing debut by the screenwriter of Jurassic Park: a wild and terrifying adventure about three strangers who must work together to contain a highly contagious, deadly organism

When Pentagon bioterror operative Roberto Diaz was sent to investigate a suspected biochemical attack, he found something far worse: a highly mutative organism capable of extinction-level destruction. He contained it and buried it in cold storage deep beneath a little-used military repository.

Now, after decades of festering in a forgotten sub-basement, the specimen has found its way out and is on a lethal feeding frenzy.  Only Diaz knows how to stop it.

He races across the country to help two unwitting security guards—one an ex-con, the other a single mother.  Over one harrowing night, the unlikely trio must figure out how to quarantine this horror again.  All they have is luck, fearlessness, and a mordant sense of humor.  Will that be enough to save all of humanity?

David Koepp is a celebrated American screenwriter and director best known for his work on Jurassic Park, Spider-Man, Panic Room, and War of the World. His work on screen has grossed over $6 billion worldwide.

“[Koepp] writes well, he has a wicked sense of humor and his characters are so keenly, intelligently and even movingly drawn. . . . On every level, Cold Storage is pure, unadulterated entertainment.”
— Douglas Preston, The New York Times Book Review

“Engaging. . . . Koepp recognizes that this is all pretty zany and imbues the novel with a mordant sense of humor, which gives Cold Storage a welcome vibrancy and lightness.”
— USA Today

“It has all the hallmarks of a thriller destined for Hollywood.”
— Polygon

“A thriller of breakneck speed, Cold Storage will be an engaging read that fans of Blake Crouch’s Dark Matter could devour in one sitting.”
— Ars Technica

“A terrific thriller: ambitious, audacious, gory, scary, flamboyant, and funny....[Koepp makes] a seamless, massively effective transition from the visual medium to the literary. The book doesn’t read like a modestly beefed-up pitch for a movie; it’s a rich, textured, and downright impossible-to-put-down story.”
— Booklist (starred review)

“Cold Storage is The Andromeda Strain on crack: chilling end-of-the-world terror infected with wicked humor. Koepp pulls it off with style. When the real apocalypse arrives, may it be even half as funny as this.”
— Linwood Barclay, New York Times bestselling author of A Noise Downstairs

To be simultaneously terrifying and hilarious is a masterstroke few writers can pull off, but Koepp manages in this incredible fiction debut that calls to mind a beautiful hybrid of Michael Crichton and Carl Hiaasen. Cold Storage is sheer thrillery goodness, and riotously entertaining.
— Blake Crouch, New York Times bestselling author of Dark Matter

You might as well put your plans on ice for the next twenty-four hours, as all you’ll be doing is reading this book.  The very definition of ‘thriller,’ David Koepp’s Cold Storage grabs you and shakes you and ultimately leaves you grinning.
— Scott Frank, Academy Award-nominated writer of Logan and Out of Sight