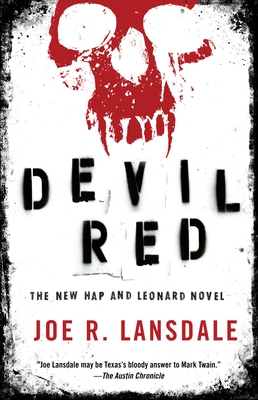 This is book number 8 in the Hap and Leonard Series series.

If there’s one thing Hap Collins and Leonard Pine like, it’s trouble—and they especially like getting paid to find it. So when their friend and sometime boss Marvin Harmon asks the boys to look into a cold-case double homicide, they’re happy to oblige. It turns out that both victims were set to inherit some serious money, and one of them ran with an honest-to-goodness vampire cult. The more closely Hap and Leonard look over the crime-scene photos, the more trouble they see. The image of a red devil’s head painted on a tree is just the beginning—a little research turns up a slew of murders with that same fiendish signature. And if things aren’t weird enough, Leonard has taken to wearing a deestalker cap . . . Will this be the case that finally sends Hap over the edge?

Joe R. Lansdale is the author of over thirty novels and numerous short stories. His work has appeared in national anthologies, magazines, and collections, as well as numerous foreign publications. He has written for comics, television, film, newspapers, and Internet sites. His work has been collected in eighteen short-story collections, and he has edited or co-edited over a dozen anthologies.

Lansdale has received the Edgar Award, eight Bram Stoker Awards, the Horror Writers Association Lifetime Achievement Award, the British Fantasy Award, the Grinzani Cavour Prize for Literature, the Herodotus Historical Fiction Award, the Inkpot Award for Contributions to Science Fiction and Fantasy, and many others.

A major motion picture based on Lansdale's crime thriller Cold in July was released in May 2014, starring Michael C. Hall (Dexter), Sam Shepard (Black Hawk Down), and Don Johnson (Miami Vice). His novella Bubba Hotep was adapted to film by Don Coscarelli, starring Bruce Campbell and Ossie Davis. His story "Incident On and Off a Mountain Road" was adapted to film for Showtime's "Masters of Horror." He is currently co-producing a TV series, "Hap and Leonard" for the Sundance Channel and films including The Bottoms, based on his Edgar Award-winning novel, with Bill Paxton and Brad Wyman, and The Drive-In, with Greg Nicotero.

Lansdale is the founder of the martial arts system Shen Chuan: Martial Science and its affiliate, Shen Chuan Family System. He is a member of both the United States and International Martial Arts Halls of Fame. He lives in Nacogdoches, Texas with his wife, dog, and two cats.

“Joe Lansdale may be Texas’s bloody answer to Mark Twain.” —The Austin Chronicle

“The humor and dialogue keep the narrative rocketing along.” —Entertainment Weekly

“Joe R. Lansdale’s latest fun-loving meditation on the forces of good and evil. . . .  Plenty of the trademark Hap and Leonard camaraderie, wise-cracking and profanity.” —The Free Lance-Star

“If you've read more than a few words strung together by Lansdale in any given context, you're going to pick up a book with his name on the cover. . . . A new installment in the [Hap and Leonard] series is cause to rejoice.” —BookReporter

“Joe Lansdale is one of the greatest yarn spinners of his generation: fearless, earthy, original, manic and dreadfully funny.” —The Dallas Morning News