Bane and Shadow (The Empire of Storms #2) (Mass Market) 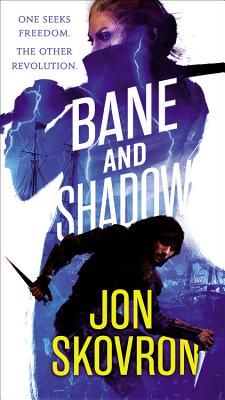 This is book number 2 in the The Empire of Storms series.

A killer adventure fantasy follow-up to HOPE AND RED, set in a fracturing empire spread across savage seas, where two young people from different cultures find common purpose.
Red is being trained as a cold-blooded assassin by the biomancers. As he becomes increasingly embroiled in palace politics, he learns that even life among the nobility can be deadly.
While terrorizing imperial ships as the pirate Dire Bane, Hope stumbles onto a biomancer plot of such horrifying scope that it makes even the massacre of her childhood village seem small in comparison.
With the biomancers tightening their grip of fear over the empire, Hope and Red struggle to fill their new roles and responsibilities, but the cost will be greater than any of them realize.
The Empire of Storms series
Hope and Red
Bane and Shadow

"The trilogy continues with murder and mayhem written in a captivating style that is breathtaking. Unique appellations and ingenious description add flair and humor to this continuing saga."—RT Book Reviews, Top Pick on Bane and Shadow

"Intricate world of military action, magic, and piracy . . . . an emotionally engrossing tale leaves one eagerly awaiting the next book in the series."—Library Journal (starred review) on Bane and Shadow

"Hope and Red return in the ingenious second installment of the Empire of Storms trilogy . . . . a tremendously satisfying segment of the journey."—Publishers Weekly on Bane and Shadow

"Furious where it needs to be, deceptively tender where it can get away with it, adventurous all around."—Sam Sykes on Hope and Red

"Hope and Red is my favorite book of the year. Full of nonstop, irresistible adventure, it captures that wonderful classic epic fantasy feel, while introducing a fantastic pair of memorable new heroes. I can't wait for the sequel!"—Sarah Beth Durst, author of The Queen of Blood