Blood and Tempest (The Empire of Storms #3) (Mass Market) 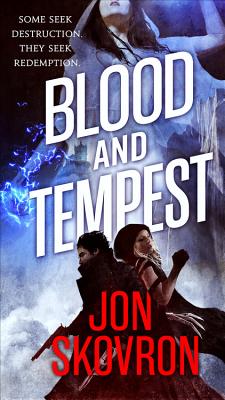 This is book number 3 in the The Empire of Storms series.

The thrilling conclusion to Jon Skovron's adventure fantasy series, two young people from a fracturing empire spread across savage seas must find a way to keep their nation together.

Still reeling from the events at Dawn's Light, Hope struggles to understand what it means to be a warrior who has vowed to never again take up a sword.
Red is enjoying his new role as imperial spy. Perhaps a bit too much. But his loyalties will be tested when his employer, Lady Hempist, relents and assigns him the one task he's been begging for all along: recruiting Hope and Brigga Lin to help rid the empire of biomancery once and for all.

Fate brought them together; it will tear their empire apart.
The Empire of Storms
Hope and Red
Bane and Shadow
Blood and Tempest

"Furious where it needs to be, deceptively tender where it can get away with it, adventurous all around."—Sam Sykes on Hope and Red

"Skovron's eye for characterization and situations is exceptional... A compelling coming-of-age yarn."
—Publishers Weekly (starred review) on Hope and Red

"Engaging ... [Skovron's] skillfully developed world, filled with swords and magic, is a perfect foil for his dynamic characters."—Library Journal on Hope and Red

"A great swashbuckling adventure."
—The Sun (UK) on Hope and Red

"A fun beginning ... promises to be a great series."—Philadelphia Free Press on Hope and Red

"The adventures of Hope and Red will continue, and you should plan to sail with them."—SFRevu on Hope and Red

"Gripping and, most importantly, fun."—SFX on Hope and Red