A Blade of Black Steel (The Crimson Empire #2) (Paperback) 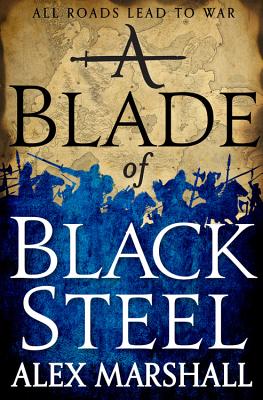 This is book number 2 in the The Crimson Empire series.

The sequel to Alex Marshall's A Crown for Cold Silver, an outstanding, game-changing epic adventure featuring an unforgettable warrior.
After five hundred years, the Sunken Kingdom has returned, and brought with it a monstrous secret that threatens to destroy every country on the Star.
As an inhuman army gathers on its shores, poised to invade the Immaculate Isles, the members of the Cobalt Company face an ugly choice: abandon their dreams of glory and vengeance to combat a menace from another realm, or pursue their ambitions and hope the Star is still there when the smoke clears.

Five villains. One legendary general. A battle for survival.

"This is a fitting follow-up to the first Crimson Empire book; full of bloody battles and strong females... The writing and setting are rich... Purna is a strong character who adds an interesting dynamic to the twisted and surprising story."—RT Book Reviews on A Blade of Black Steel

"This is my favorite kind of fantasy -- alternatively irreverent and brutal, with a cast of wonderfully scarred and nasty people. Any fans of Steven Erikson, Mark Lawrence, or Joe Abercrombie will love A Crown for Cold Silver; I've just finished it, and I'm already eager for more."—Django Wexler on A Crown for Cold Silver

"Zosia and her Five Villains are as fun as they are twisted."—David Dalglish on A Crown for Cold Silver

"An epic fantasy that will surprise you. When was the last time you read one of those? Marshall deftly sets up and subverts expectations at every turn. If you think you know what's coming, think again."—Kameron Hurley on A Crown for Cold Silver

"Feels like a Tarantino movie... A pure joy to read."—Booklist (starred review) on A Crown for Cold Silver

"This lusty debut will have you gasping in one breath and laughing in the next...Marshall is playing a long, glorious game."—Washington Post on A Crown for Cold Silver

"An epic tale of invasion, civil war, and divine incursion."—Kirkus on A Crown for Cold Silver