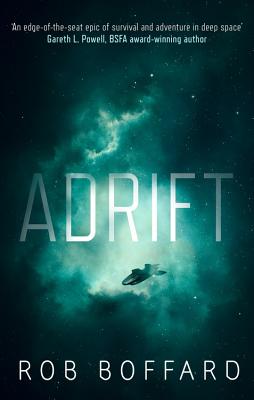 Sigma Station. The ultimate luxury hotel, in the far reaches of space.

For one small group, a tour of the Horsehead Nebula is meant to be a short but stunning highlight in the trip of a lifetime.

But when a mysterious ship destroys Sigma Station and everyone on it, suddenly their tourist shuttle is stranded.

They have no weapons. No food. No water. No one back home knows they're alive.

And the mysterious ship is hunting them.

Rob Boffard is a South African author who splits his time between London, Vancouver and Johannesburg. He has worked as a journalist for over a decade, and has written articles for publications in more than a dozen countries, including the Guardian and Wired in the UK.

"The dramatic story of Thomas W. Nye, the sole survivor of the John Rutledge's tragic encounter with an iceberg in 1856, is beautifully rendered, gripping, and emotionally engaging from beginning to end. Murphy and Vlahou perform a literary magic trick of sorts, transporting readers into another era and enabling them to see and feel what it was like to travel across the ice-choked north Atlantic in the depths of winter, and confront the ultimate nightmare scenario--a sinking ship in the middle of the ocean with no help in sight. Adrift is a chilling and searingly memorable tale of unimaginable suffering and one man's bittersweet triumph over the odds."--Eric Jay Dolin, author of Black Flags, Blue Waters and Leviathan


"Ice is a killer. It kills ships and it kills the men and women on them. Brian Murphy reminds us that for every famous ship that goes down--think Titanic--countless thousands of others have been lost at sea, nameless, forgotten. In Adrift he brings back to life the story of the John Rutledge, and of the crusty Yankee sailors and seasick Irish immigrants who were aboard, and who died when the three-master foundered in the lonely, iceberg-studded North Atlantic--all but one man, that is, Thomas Nye, who kept his wits about him in a frigid open lifeboat and, half-frozen, clung to life. Murphy writes with such authority, you can feel the cold creeping into your bones."--Will Englund, Pulitzer, Polk, and Overseas Press Club Award-winning journalist


"It's obvious tremendous research went into Adrift, and maritime history buffs will appreciate not only the saga of the Rutledge but also other ships in peril during the 1800s, when crossing the Atlantic in winter was literally a life-and-death gamble."--Michael J. Tougias, coauthor of So Close to Home, The Finest Hours, and Above & Beyond


"Murphy writes a detailed but fascinating account of the ship leaving Liverpool harbor; it sounds as if he has done so on a sailing craft himself...He has researched the era assiduously."—Internet Review of Books

"[Brian Murphy] almost makes readers feel as if they were passengers in the lifeboat...and skillfully weaves a story of heroism, delusion, and survival...Adrift is well-written and well-researched, and offers a valuable analysis of a tragedy that is symbolic of hundreds of similar tragedies on the open seas."—New York Journal of Books

"A magnificently researched telling of the sinking of the John Rutledge and subsequent nightmare endured by her passengers and crew...A gripping and informative read...Readers don't need to be able to discern a mizzen from a main or port from starboard to enjoy Murphy's tale of Thomas Nye and his fight for survival...As beach season comes to a close and hurricane season begins to come into full swing, there are few better books to remind readers of the power of the deep blue ocean than Brian Murphy's Adrift."—Shipwreckology

"Extensively researched and likely the best book ever written explaining the decades lasting, interlacing effects of shipwrecks on families, businesses, and even global politics...[For] both scholars and the general public alike."—Shipwrecks.com


"A heartrending and compelling account of shipwreck and survival...Vividly recreates life and sailing in the middle of the 19th century. [Murphy's] primary purpose is to tell the story of one ship and the people aboard her, yet a secondary goal is for the book to serve as an elegy to all the forgotten men, women, and children who lost their lives. He accomplishes both with dignity and passion. Adrift is so riveting that even in the midst of summer heat, the wintry cold seeps so deeply into your bones that not even the warmest wool will dispel the bleak aloneness of being surrounded by water and ice in a small boat."—Pirates and Privateers


"A tale of harrowing adventure, but also a study of human nature in desperate circumstances when conventional morality and social norms are washed away."—The Literate Quilter


"Murphy's use of nautical terms and imagery situates readers in the boat with boatswains and horseshoe crabs, longboats and buoys and dock riggers...[A] forward-moving, wave-after-wave story...Gripping."—Washington Independent Review of Books

"Consider the modern-day books on boat-meets-immoveable-object: ships doomed by rogue waves (The Perfect Storm), humongous whales (In the Heart of the Sea) and wartime torpedoes (Dead Wake)...Joining this flotilla of masterful histories is Brian Murphy's Adrift."—Winnipeg Free Press

"Piecing together information from newspaper accounts, diaries, family records and the salvaged log, Murphy has meticulously reconstructed the events of the tragic collision at sea and its aftermath."
—Cape Cod Times