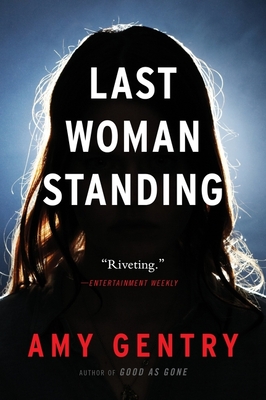 From the author of Good as Gone (“So gripping you might want to start to question your own family’s past”—Entertainment Weekly) comes a brilliant and timely thriller: Strangers on a Train by way of Thelma and Louise.

Dana Diaz is an aspiring stand‑up comedian—a woman in a man’s world. When she meets a tough computer programmer named Amanda Dorn, the two bond over their struggles in boys’ club professions. Dana confides that she’s recently been harassed and assaulted while in L.A., and Amanda comes up with a plan: they should go after each other’s assailants, Strangers on a Train–style. But Dana finds that revenge, however sweet, draws her into a more complicated series of betrayals. Soon her distrust turns to paranoia, encompassing strangers, friends—and even herself. At what cost will she get her vengeance? Who will end up getting hurt? And when it’s all over, will there be anyone left to trust?

AMY GENTRY is the author of Good as Gone, a New York Times Notable Book, and Last Woman Standing. She is also a book reviewer and essayist whose work has appeared in numerous outlets, including the Chicago Tribune, Salon, the Paris Review, the Los Angeles Review of Books, and the Austin Chronicle. She holds a PhD in English from the University of Chicago and lives in Austin, Texas.

"The writing here is sharp, with contemporary social issues and moral twists that turn on a dime. 'Last Woman Standing' unfolds like a master class in improvisational tragedy."
—Wall Street Journal

“Riveting…few titles feel as righteously ripped from the headlines as Amy Gentry’s Last Woman Standing…the novel genuinely engages with the mechanics of payback, the complexities and limitations of embarking on such a quest… you hear those [trying to find their voice] loud and clear — and empowered.”
—Entertainment Weekly

"In this page-turning psychological thriller, Gentry asks readers to confront the magnitude of harassment women face on a daily basis and the difficulties of working in a male-dominated industry... Gentry knows the way society treat survivors and the narratives about sexual assault matter. That includes her book."
—Lauren Jones, Bustle

“Timely…roils with a rage that yanks its characters through an increasingly twisted plot like a riptide. Grappling with each new discovery in the novel mirrors recent, all-too-familiar experiences of struggling to understand how so many powerful men could have committed such atrocious acts without consequence…one of the things Last Woman Standing asks of us is to accept the places where rage takes women—and one of those places is power.”
—Bitch

“LAST WOMAN STANDING is a speedy, bloody, feminist thriller…it’ll linger in the reader’s mind, and be worthy of discussion…it dances through its plot…[which] keeps the book interesting, but so, too, does the book’s nudge to thoughtfulness.”
—Bust

“A perfect addition to the [feminist thriller] category…characters twist and turn under author Amy Gentry’s skillful direction…it’ll linger in the reader’s mind.”
—Bustle

"While this 'You scratch my back, I’ll scratch yours' plotline includes moments of delicious and perhaps appropriate revenge, all is not what it seems to be. Woven into the suspenseful narrative are elements of the #MeToo movement and the gig economy, as well a few familiar old chestnuts including the vagaries of friendship and lost loves, the heartbreak of deception, and the heart-stopping chill of insidious intents."—The Seattle Review of Books

“Cutting…feels a bit like They Shoot Horses, Don’t They?, but for the Austin comedy scene [with] a well-thought-out nod to Strangers on a Train…we won’t say anything more, lest we spoil the fun.”—CrimeReads, “The Most Anticipated Crime Books of 2019”

“Gentry’s thoughtful craftsmanship makes Last Woman Standing stand out…[her] characters have depth and personality…and yet Last Woman Standing does concern itself with an everywoman experience. Gentry grapples directly with the aftermath of accusations both private and public, daring readers to consider what justice really means in the face of men who, historically, have every rightful expectation that they can get away with whatever they want…Fascinating and titillating.” –Texas Observer

“An electric revenge thriller…this is a read-in-one-nighter with a you've-eaten-12-too-many-chocolate-covered-espresso-beans jangling buzz. Genuinely surprising and satisfying…what's so elegant is the way Gentry skirts around giving us easy answers about what morality looks like in a system this broken.” –The Austin Chronicle

“An electric revenge thriller…this is a read-in-one-nighter with a you've-eaten-12-too-many-chocolate-covered-espresso-beans jangling buzz. Genuinely surprising and satisfying…what's so elegant is the way Gentry skirts around giving us easy answers about what morality looks like in a system this broken.”
—The Austin Chronicle

" Amy Genty’s “Last Woman Standing” is a piece of work."
—The Austin American-Statesman

"A tightly paced and morally murky thriller that combines the sweet, ancient pleasure a revenge story brings with the modern pain of the #metoo movement...one hell of a ride...intense, absorbing and darkly funny exploration of paranoia and revenge. Last Woman Standing is a winner – just don’t read it too close to bedtime."
—All About Romance

"A solid mystery/thriller. It’s interesting, fast-paced, and it kept my interest until the end. I liked Amy Gentry’s writing style and I will definitely read her future novels."
—Bookaholic Reflections

"A dark and twisty tale for the #metoo moment, much deeper than the endless chatter on that theme; it made me think of Dostoevsky, if Dostoevsky were a woman writing in 2018."
—Forma

“The gripping novel sparkles with psychological realism and complicated moral questions that resonate deeply in the wake of the #MeToo movement.” –The Dallas Morning News

"Gentry's (Good as Gone, 2016) second novel is fired by the fury of characters who have taken all they can stand from the men in their professional and personal lives...the reveals come hard and fast...as the plot accelerates to its zesty ending. Combining high-tech mayhem with good old-fashioned gore and violence, this extended fantasy of truths revealed and vengeance wreaked will be a satisfying read for those who share its righteous rage."
—Kirkus Reviews

"A gripping psychological thriller...the relationships and interactions painted by Gentry are both vividly realistic and taken straight from #MeToo headlines. A topical, compelling read that librarians should hand to Paula Hawkins’ fans."
—Booklist

“A twisty and engrossing thriller that will keep you guessing until the very end.”
—Karin Slaughter, International Bestselling Author

“Last Woman Standing may be the first standout suspense novel of 2019. Female rage, stand-up comedy, Highsmith homage, and some surprises that got even me.”
—Sarah Weinman, author of The Real Lolita

"A harrowing and razor-sharp thriller, Amy Gentry’s Last Woman Standing feels both ripped from the headlines and utterly timeless as it takes on gender and violence and the far limits of female rage. As the story twists and turns, you’ll feel breathless, troubled and helplessly propelled to its deeply satisfying final pages."
—Megan Abbott, author of You Will Know Me

"Savage, brilliant, and pulse-poundingly gripping, Last Woman Standing will leave you stunned. Amy Gentry’s revenge thriller is an explosive answer to America’s long ignored culture of sexual violence, and she uses all the tools of modern life—technology, apps, entertainment, and social media—to create a world where victims become vigilantes and there’s nowhere to hide. Gentry’s gift for tapping into both the humanity and darkness of every character works its way into the reader’s subconscious, making us attempt to draw an impossible line between justice and vengeance. An absolute must-read for 2019."
—Mindy Mejia, author of Everything You Want Me to Be and Leave No Trace

“I read Last Woman Standing over the course of one thrilling afternoon—it’s a heart-pounding look at the line between justice and vengeance, and what happens when someone leaps over that line. It's also a thoughtful look at how women are perceived and treated in male-dominated industries and beyond, and the lasting effects of such treatment, shedding light on an important and pertinent topic in our culture.”
—Rena Olsen, author of With You Always and The Girl Before