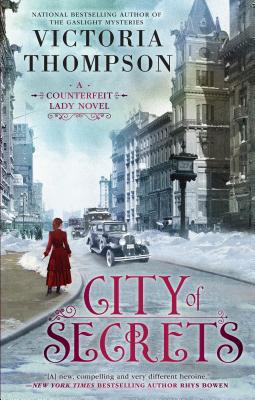 This is book number 2 in the A Counterfeit Lady Novel series.

An exciting new book in the series featuring woman-on-the-run Elizabeth Miles--from the beloved national bestselling author of the Gaslight Mysteries.

Elizabeth Miles knows that honesty is not always the best policy when it comes to finding justice.

Elizabeth has discovered that navigating the rules of high society is the biggest con of all. She knows she can play the game, but so far, her only success is Priscilla Knight, a dedicated young suffragist recently widowed for the second time. Her beloved first husband died in a tragic accident and left her with two young daughters—and a sizable fortune. While she was lost in grief, Priscilla’s pastor convinced her she needed a man to look after her and engineered a whirlwind courtship and hasty marriage to fellow parishioner Endicott Knight. Now, about nine months later, Endicott is dead in what appears to be another terrible accident.

Everyone is whispering, but that is the least of Priscilla’s troubles. She had believed Endicott was wealthy, too, but her banker tells her she has no money left and her house has been mortgaged. He also hints at a terrible scandal and refuses to help.

Priscilla stands to lose everything, and Elizabeth is determined not to let that happen. But, as always, Elizabeth walks a fine line between using her unusual talents and revealing her own scandalous past. Elizabeth soon discovers that Endicott’s death was anything but accidental, and revealing the truth could threaten much more than Priscilla’s finances. To save her new friend’s future—and possibly her own—Elizabeth, along with her honest-to-a-fault beau, Gideon, delve into the sinister secrets someone would kill to keep.

Victoria Thompson is the Edgar® and Agatha award–nominated author of City of Lies, as well as the Gaslight Mysteries, including Murder on Union Square, Murder in the Bowery and Murder in Morningside Heights. She is also the author of numerous historical novels.

“With vivid character mannerisms, heavy historical influence and just the right amount of romance, Thompson has created an extraordinary foundation for a series."—RT Book Review

"Fast paced and intriguing."--Nancy Herriman, author of the A Mystery of Old San Francisco series

"Strong, smart and savvy, this counterfeit lady is a grifter with a heart of gold, and I look forward to her next adventure!"--Ashley Weaver, author of the Amory Ames Mysteries

Praise for the Edgar® and Agatha award-nominated Gaslight Mysteries

"A fascinating window into a bygone era."--Kirkus Reviews