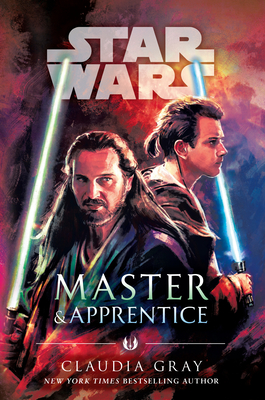 Twenty years ago, I discovered my love for Star Wars. I was eight years old, sitting at the end of the front row of a sold-out movie theater when Phantom Menace premiered. I was too young to be disappointed, the way many fans of the original trilogy were. I've grown up since to be an avid defender of the prequels, but at the time I was just enthralled. This movie was for me. The film opens with two Jedi, a Master and an Apprentice. Twenty years later, Claudia Gray has breathed life into this relationship that ended far too soon. This story, which takes place nearly a decade prior to Episode I, shines a light on the dynamic duo. Qui-Gon is a bit of a renegade, a student of prophecy who disagrees with many of the decisions of the Jedi Council. Obi-Wan is a bit of a stickler, a by the books padawan determined to become a great Jedi Knight. When the two of them are sent to Pijal, they'll be forced to reconcile with their beliefs and their faith in not only themselves, or the council, but the will of the Force. It’s everything my inner child could have hoped for and more.

NEW YORK TIMES BESTSELLER • An unexpected offer threatens the bond between Qui-Gon Jinn and Obi-Wan Kenobi as the two Jedi navigate a dangerous new planet and an uncertain future in the first canon Star Wars novel to take place before the events of Star Wars: The Phantom Menace.

A Jedi must be a fearless warrior, a guardian of justice, and a scholar in the ways of the Force. But perhaps a Jedi’s most essential duty is to pass on what they have learned. Master Yoda trained Dooku; Dooku trained Qui-Gon Jinn; and now Qui-Gon has a Padawan of his own. But while Qui-Gon has faced all manner of threats and danger as a Jedi, nothing has ever scared him like the thought of failing his apprentice.

Obi-Wan Kenobi has deep respect for his Master, but struggles to understand him. Why must Qui-Gon so often disregard the laws that bind the Jedi? Why is Qui-Gon drawn to ancient Jedi prophecies instead of more practical concerns? And why wasn’t Obi-Wan told that Qui-Gon is considering an invitation to join the Jedi Council—knowing it would mean the end of their partnership? The simple answer scares him: Obi-Wan has failed his Master.

When Jedi Rael Averross, another former student of Dooku, requests their assistance with a political dispute, Jinn and Kenobi travel to the royal court of Pijal for what may be their final mission together. What should be a simple assignment quickly becomes clouded by deceit, and by visions of violent disaster that take hold in Qui-Gon’s mind. As Qui-Gon’s faith in prophecy grows, Obi-Wan’s faith in him is tested—just as a threat surfaces that will demand that Master and apprentice come together as never before, or be divided forever.

Claudia Gray is the author of Star Wars: Bloodline; Star Wars: Leia, Princess of Alderaan; and Star Wars: Lost Stars. Her other books include Defy the Stars and the Evernight, Spellcaster, and Firebrand series. She has worked as a lawyer, a journalist, a disc jockey, and a particularly ineffective waitress. Her lifelong interests include old houses, classic movies, vintage style, and history. She lives in New Orleans.

“Gray's other Star Wars novels—Lost Stars, Bloodline and Leia: Princess of Alderaan—are among the best you can read, but Master & Apprentice stands out as her strongest.”—CNET

“Thankfully, the novel absolutely delivers on the goods and the wait has been worth it.”—Cinelinx

“Master & Apprentice proves—again—that Claudia Gray ‘gets’ Star Wars.”—Dork Side of the Force

“Gray has not only written her finest novel to date in my opinion, but certainly one of the finest canon novels as well, maybe the finest.”—TheForce.Net