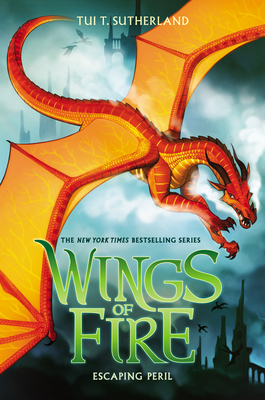 This is book number 8 in the Wings of Fire series.

Peril has been loyal to Queen Scarlet, who used her fatal firescales to kill countless dragons in the SkyWing arena. Now, Peril is loyal to Clay, the only dragonet who has ever been her friend. So when Scarlet threatens Jade Mountain Academy, Peril sets off to find her former queen, stop her, and save the day, no matter what it takes.

There's just one problem: a strangely persistent SeaWing, Turtle, insists on coming along, too. Turtle is worried about his friends, who left to search for Scarlet and haven't returned. Peril is worried that she might accidentally burn Turtle -- or burn him on purpose, for being so annoying -- and frustrated that she keeps saying and doing the wrong things. She can't escape her firescales, and she can't escape her reputation as the deadliest dragon in Pyrrhia.

So when she's offered a chance to trade everything for a second chance, Peril has to decide who she's really loyal to . . . and whether her own scales might actually be worth saving.

Tui T. Sutherland is the author of the New York Times and USA Today bestselling Wings of Fire series, the Menagerie trilogy, and the Pet Trouble series, as well as a contributing author to the bestselling Spirit Animals and Seekers series (as part of the Erin Hunter team). In 2009, she was a two-day champion on Jeopardy! She lives in Massachusetts with her wonderful husband, two adorable sons, and one very patient dog. To learn more about Tui's books, visit her online at www.tuibooks.com.

Praise for The Lost Heir (Wings of Fire, Book Two):

"[A] perfect adventure for young fantasy fans to sink their teeth into." -- School Library Journal

Praise for The Dragonet Prophecy (Wings of Fire, Book One):

"Dramatic battle scenes, double-crosses, and one seriously deranged queen makes
WINGS OF FIRE a series that should have broad appeal for middle-grade fantasy
fans." -- Booklist

"Fast-paced and detailed, this first installment in a new adventure series is
entertaining." -- Kirkus Reviews

"Readers of all ages will be enchanted by the humanistic storyline and the
page-turning excitement." -- Library Media Connection