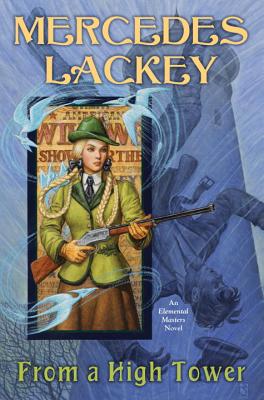 By Mercedes Lackey
Email or call for price.
Hard to Find

This is book number 10 in the Elemental Masters series.

Giselle had lived fourteen years of her life in an abandoned tower. Her mother kept Giselle, a young Air Master still growing into her abilities, isolated for the sake of herself and others.

This life left her unprepared when a handsome young man appeared at the base of her tower. But when the young stranger entered her window, he tried to force himself on her. She was saved by Mother, an Earth Master, who hurled the man out the window he had climbed in.

The Foresters of the Black Forest were Earth Masters whose job it was to cleanse the ancient forest of evil elementals, and over the next four years, they shared their fighting expertise to teach Giselle self-defense. By the age of twenty, Giselle was an expert markswoman, and it was this skill that she used to survive when Mother died. Cutting her long hair, she masqueraded as a boy to enter shooting competitions, and used the prize money to support herself.

But she could not forget the first man who assaulted her, for when that stranger had fallen from her tower long ago, his body had never been found. In Giselle’s heart, she was certain his magic had helped him to survive the fall. Surely, it was only a matter of time before he found her and sought revenge. Was she prepared to stand against him?