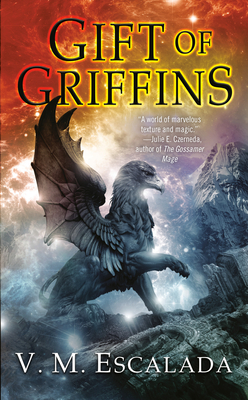 This is book number 2 in the Faraman Prophecy series.

The second book in the Faraman Prophecy epic fantasy series returns to a world of military might and magical Talents as Kerida Nast continues the quest to save her nation.

Kerida Nast and her companions have succeeded in finding Jerek Brightwing, the new Luqs of Farama, and uniting him with a part of his Battle Wings, but not all their problems have been solved. Farama is still in the hands of the Halian invaders and their Shekayrin, and it's going to take magical as well as military strength to overcome them.

Unexpected help comes from Bakura, the Princess Imperial of the Halians, whose Gifts have been suppressed.  As the Voice of her brother the Sky Emperor she has some political power over the Halian military, and she will use it to aid the Faramans, if Kerida can free her from what she sees as a prison. But whether Kerida can help the princess remains to be seen. If she succeeds, Bakura may prove their salvation. But should Kerida fail, all may be lost....

V. M. Escalada's cultural background is half Spanish and half Polish. Her most unusual job was translating letters between lovers, one of whom spoke only English, the other only Spanish. In addition to the novels of the Faraman Prophecy, she is also the author of the Dhulyn and Parno novels under the name Violette Malan.

Praise for the Faraman Prophecy

"Halls of Law begins a fresh, engaging new fantasy series set in a world of marvellous texture and magic. Love this one and can't wait for more!" —Julie E. Czerneda, author of A Turn of Light

"The richness of the world is reason enough to immerse yourself in this book. The typical historically based fantasy empire is given a makeover; this is a culture with abundant opportunities for women to wield power, political and otherwise." —Barnes & Noble Sci-Fi and Fantasy Blog

"Gift of Griffins deepens and expands the Faraman Prophecy universe. I strongly look forward to seeing where the story proceeds from here." —Skiffy and Fanty

"I was drawn in by the comforting prose and stayed fully invested because of the characters and world. Halls of Law is a fun, optimistic Epic Fantasy that proved a welcome change of pace from some of the more grimdark fantasy I’d been reading." —SFFWorld

"Kerida's a great protagonist.... She's practical and makes hard decisions about her own survival.... I really enjoyed this and eagerly await the sequel." —Sci-Fi Fan Letter

"If you are looking for a new epic fantasy series to sink your reading teeth into...Halls of Law is definitely a winner.... [A]n epic fantasy for the 21st century, where we have an absolutely marvelous heroine’s journey from the outset." —Reading Reality

"[Escalada] applies a recognizable magic (and semi-feudal) system in refreshing ways laying the groundwork for a fantastical story that’s a shot of new energy into an unexpected second series installment." —Two Gay Geeks