Death of a Neighborhood Witch (Hardcover) 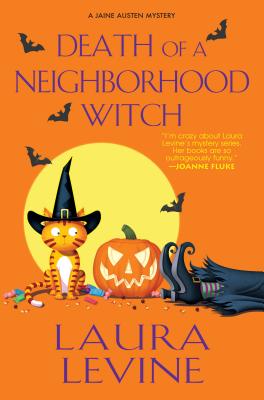 Halloween is just around the corner, and between cauldrons of candy and a deliciously cute new neighbor, Jaine Austen is struggling to resist her sweet tooth. But this year, her once humdrum neighborhood seems to be handing out more tricks than treats...When her faithful feline Prozac unwittingly scares to death a parakeet belonging to the neighborhood's resident curmudgeon, Jaine finds herself knee-deep in toil and trouble. The cantankerous Hollywood has-been once played the part of Cryptessa Muldoon, television's fourth most famous monster mom. Now a bitter, paranoid old dame, Cryptessa spends her days making enemies with everyone on the street, and accidental bird killer Jaine is no exception. So when the ornery D-lister is murdered with her own Do Not Trespass sign on Halloween night, the neighborhood fills with relief - and possible culprits. With a killer on the loose, Jaine hardly has time to fall under the spell of her yummy new neighbor Peter. As the prime suspect, she summons her sleuthing skills to clear her name and soon discovers that everyone has a few skeletons in their closets - and the motives for murder are endless. Could it have been Cryptessa's next door neighbours, the barracuda husband and wife realtors whose landscaping Cryptessa had bulldozed? Or the seemingly sweet old lady whose beloved dog was the object of Cryptessa's wrath? Or perhaps the crotchety actress was done in by her own nephew in a desperate attempt to get his hands on her money? As the masks come off, Jaine's search for sweet justice turns up more questions than answers. And just when she thought nothing could be scarier than her run-in with a tortuous Tummy Tamer, she closes in on the killer and learns the true meaning of grave danger...