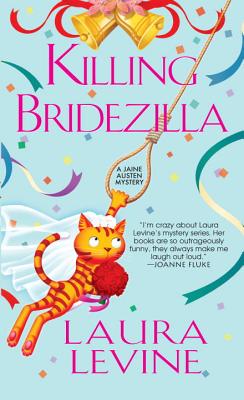 This is book number 7 in the A Jaine Austen Mystery series.

When writer-for-hire Jaine Austen signs on to script vows for the ultimate Bridezilla, "I do's" soon become "I wish I hadn't's"--and curtains for the bride spell a veil of woes for Jaine. . .

Jaine's accepted her share of lame gigs to pay the bills, but rewriting Shakespeare's got to be an all-time low. The fiasco begins with a call from Jaine's high-school nemesis, uber rich uber witch Patti Devane. It seems Patti will soon be sashaying down the aisle with another former classmate from Hermosa High, and she'd like the exchange of vows to evoke Romeo and Juliet. . .except without the "downer" of an ending.

Even worse than the assignment itself is dealing with Patti as a client. At least Jaine's not alone, as nobody can stand the demanding, spoiled, and incredibly rude Bridezilla from Hell. Patti's managed to rack up an amazingly long list of enemies in a short time, not the least of whom include her prospective mother-in-law, the soon-to-be ex-wife of Patti's stolen soon-to-be groom, and just about everyone involved in the wedding preparations. So it isn't a complete surprise when the erstwhile Juliet plunges to her death during her balcony scene.

The loosened bolts that brought down the bride were clearly an act of sabotage--what's not so obvious is whom, among Patti's numerous haters, committed this murder most foul. Was it the caterer she threatened to ruin? The bridesmaid tossed out of the wedding party for being too chubby? Jaine's determined to learn the truth--if only to end the hideous walk down memory lane kicked off by her association with Patti.

Between fending off advances from the nerd of her high school nightmares and figuring out ways to stop Prozac the cat from corrupting the victim's pet Poodle, Jaine's involvement in this case keeps veering between comedy and tragedy. That is, until another body is discovered--and the killer starts laying plot for a final act--starring Jaine. . .

Laura Levine is a comedy writer whose television credits include The Bob Newhart Show, Laverne & Shirley, The Love Boat, The Jeffersons, Three's Company, andMary Hartman, Mary Martman. Her work has been published in The Washington Post and The Los Angeles Times. She lives in Los Angeles, and is currently working on the next Jaine Austen mystery. Readers can reach her at Jaineausten@aol.com, or her website: www.JaineAustenMysteries.com.