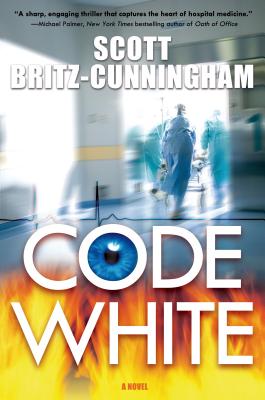 By Scott Britz-Cunningham
Email or call for price.
Out of Print

You enter the operating room. The nurse hands you a
scalpel. You precisely cut into the exposed human flesh. The loudspeaker
crackles a page for Mr. White. Who is Mr. White? He’s not a who, but a what:
the hospital’s code phrase for a bomb. Thus begins a day-long trauma in which
the performance of a historic surgery is the background and part of the
complicated motivational psychology of the bomber. Though I usually experience
the unfolding of hospital drama via television and computer screens with its
quick story-telling pace, I found the initial, slower rhythm of Code White
to be a refreshing way to engage with this futuristic medical suspense story. A
human and artificial intelligence collaboration holds the lives of hundreds of
people in their hands and minds. Discover how a surgeon and a security officer
thwart the overall destructive plan and start a collaboration of their own.

Ali O'Day, a dedicated young neurosurgeon, might have a Nobel Prize in her future—if she can survive the next eleven hours.

Under the glare of live television cameras—and with her lover, Dr. Richard Helvelius, and her estranged husband, Kevin, both looking on—Ali is about to implant a revolutionary mini-computer into the brain of a blind boy. If it works, he will see again. But someone wants to stop her triumph. No sooner has she begun to operate than the hospital pagers crackle with the chilling announcement, "CODE WHITE." A bomb has been found in the medical center.

But this is no ordinary bomb—and no ordinary bomber. As minutes tick off toward the deadline, Ali suspects that a vast, inhuman intellect lies behind the plot—and that she herself may be the true ransom demand, in Code White by Scott Britz-Cunningham.

SCOTT BRITZ-CUNNINGHAM was born and raised in the Chicago area. An MD and a PhD, he works as a staff radiologist at the Brigham and Women’s Hospital in Boston, and is an assistant professor of radiology at Harvard Medical School. Dr. Britz-Cunningham lives in Quincy, Massachusetts, with his artist wife, Evelyn, and his son, Alexander. He is the author of Code White.

“Scott Britz-Cunningham has crafted a sharp, engaging thriller that captures the heart of hospital medicine and absolutely nails the frenetic energy that comes with trying to care for severely ill patients without killing them. Code White is great stuff--one of the most original medical thrillers I've read in a long time.” —Michael Palmer, New York Times bestselling author

“Talk about a ticking clock propelling a story--this one's in overdrive.... What a heart-thumping ride. Scott Britz-Cunningham is a welcome addition to the thriller genre.” —Steve Berry, New York Times bestselling author