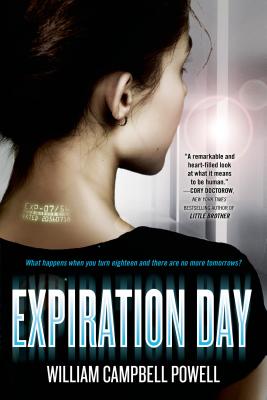 By William Campbell Powell
Email or call for price.
Out of Print

Expiration Day is an insightful coming-of-age novel set in the near future by debut author William Campbell Powell.

It is the year 2049, and humanity is on the brink of extinction.

Tania Deeley has always been told that she's a rarity: a human child in a world where most children are sophisticated androids manufactured by Oxted Corporation. When a decline in global fertility ensued, it was the creation of these near-perfect human copies called teknoids that helped to prevent the utter collapse of society.

Though she has always been aware of the existence of teknoids, it is not until her first day at The Lady Maud High School for Girls that Tania realizes that her best friend, Siân, may be one. Returning home from the summer holiday, she is shocked by how much Siân has changed. Is it possible that these changes were engineered by Oxted? And if Siân could be a teknoid, how many others in Tania's life are not real?

Driven by the need to understand what sets teknoids apart from their human counterparts, Tania begins to seek answers. But time is running out. For everyone knows that on their eighteenth "birthdays," teknoids must be returned to Oxted—never to be heard from again.

Told in diary format, Expiration Day is the powerful and poignant story of a young girl coming of age and discovering what it means to be truly human by a talented debut novelist.

WILLIAM CAMPBELL POWELL was born in Sheffield, England, and grew up in and around Birmingham, the "second city" of England. He attended King Edward’s School in Birmingham and won a scholarship to Clare College, Cambridge, where initially he studied Natural Sciences and subsequently majored in Computer Science. He now lives in High Wycombe, Buckinghamshire, with his wife, Avis, and his two teenage sons. Expiration Day, a science fiction story for teens, is his first novel.

“A remarkable and heart-filled look at what it means to be human. If you're not in tears by the last chapter, you've a hard heart indeed.” —Cory Doctorow, New York Times bestselling author of Little Brother and Homeland

“This is an in-depth exploration into a dystopian society and what it truly means to be human, with many universal teen themes as well: music, romance, body image, family issues. Tania and her friends have believably complex relationships, with the added stress of figuring out who is and is not a teknoid and what that means for relationships…. Fans of sci-fi and dystopian fiction will appreciate this tale.” —School Library Journal

“Through the diary of Tania Deeley, Powell has created a terrifyingly plausible future… The author pays homage to the genre's giants while combining realistic characters (both human and android) and detailed worldbuilding with an unpredictably optimistic conclusion… An auspicious debut.” —Kirkus Reviews

“This debut novel's premise…raises very interesting and meaningful questions about philosophy, humanity, personal choice, and feminism, which could lead to rich discussions. Hand this title to fans of Margaret Atwood's classic, The Handmaid's Tale (1986), and Veronica Roth's Divergent (2011).” —Booklist

“The chatty 11-year-old who begins this diary-style novel is very different from the determined 17-year-old who ends it, but the transition is natural, and the essence of Tania's voice stays true.… Tania's creativity, pathos, and personality prove that she's just as much a person as any flesh-and-blood human.” —Publishers Weekly

“This dystopic future is a memorable one, placed about forty years ahead in a world where the robotic children's inevitable end is mitigated only slightly by the still very real, intense love parents feel for their teknoid offspring. While sci-fi buffs might be the likeliest audience, an extra push to realistic fiction fans may have them contemplating the ways in which Tania comes of age and how little it differs from what they are themselves experiencing.” —Bulletin of the Center for Children's Books