Child of a Mad God: A Tale of the Coven (Mass Market) 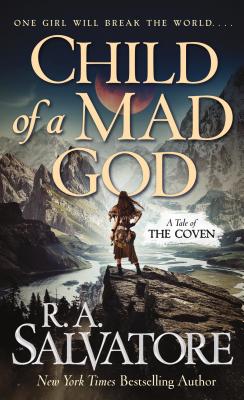 This is book number 1 in the The Coven series.

From New York Times bestselling author R. A. Salvatore, the legendary creator of Drizzt Do’Urden, comes Child of a Mad God, the first novel in the epic fantasy series, The Coven.

When Aoleyn loses her parents, she is left to fend for herself among a tribe of vicious barbarians. Bound by rigid traditions, she dreams of escaping to the world beyond her mountain home.

The only hope for achieving the kind of freedom she searches for is to learn how to wield the mysterious power used by the tribe’s coven known as the Song of Usgar. Thankfully, Aoleyn may be the strongest witch to have ever lived, but magic comes at price. Not only has her abilities caught the eye of the brutish warlord that leads the tribe, but the demon of the mountain hunts all who wield the Coven’s power, and Aoleyn’s talent has made her a beacon in the night.

""Salvatore has made a name for himself as an author who isn't afraid to go fantastically dark and to challenge what has come before. Child of a Mad God continues that legacy." —Den of Geek

"Readers will eagerly await the next entry"—Booklist, starred review