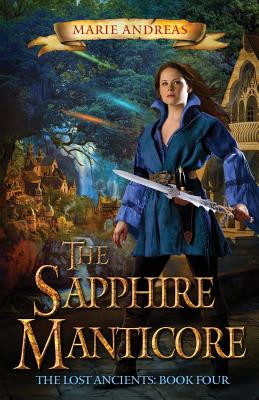 This is book number 4 in the Lost Ancients series.

Murderous magic, vanished races, killer relics, and drunken faeries--who knew the end of the world would look like this? The story that began in The Glass Gargoyle, The Obsidian Chimera, and The Emerald Dragon continues...

Taryn St. Giles thought she knew all about elves. She dreamed of the long vanished elves as a child and has spent the past fifteen years digging through their abandoned ruins in Beccia. Six months ago, Taryn found out everything she thought she knew about the elves was wrong.

Two weeks ago she found out how very wrong she'd been.

Taryn and Alric have been captured to answer for crimes against a long lost people. Crimes that could bring down an entire kingdom and revolve around a small, glass gargoyle. Part of a weapon that destroyed an extremely powerful race, now only known as the Ancients, it, and its fellow pieces are deadly to any who have them. Knowledge of the relics found by Taryn and Alric have spread far. Dangerous bands of long dead creatures, ghosts, and nightmares out of myths are waking up and hunting for the relics. And Taryn.

Marie is a fantasy and science fiction reader with a serious writing addiction. If she wasn't writing about all the people in her head, she'd be lurking about coffee shops annoying total strangers with her stories. So really, writing is a way of saving the masses. Her first fantasy series, The Lost Ancients, starts with The Glass Gargoyle. Books two and three, The Obsidian Chimera and The Emerald Dragon, are also out now. Book four, The Sapphire Manticore, will be out in January 2017. The six book series will continue in 2017 and 2018. A space opera trilogy, The Asarlai Wars, launched with Warrior Wench, and will continue in 2017 with the Victorious Dead. When not saving the masses from coffee shop shenanigans, Marie likes to visit the UK and keeps hoping someone will give her a nice summer home in the Forest of Dean. Marie is also a member of SFWA (Science Fiction and Fantasy Writers of America) and RWA (Romance Writers of America).