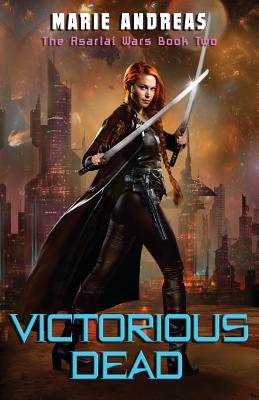 This is book number 2 in the Asarlai Wars series.

The galaxy was in for a world of hurt--chaos unseen since the violent, sadistic Asarla ruled. For the first time in her life, Vas doesn't know if she can fight hard enough to stop it.

Vaslisha Tor Dain was a simple sort of mercenary starship captain. She fought hard, drank hard, and killed people when all else failed. Those were the good days--blown to interstellar dust when a band of crazed monks tried to resurrect a race of long-dead homicidal rulers: the Asarla .

Vas and her crew defeated the first wave but at great cost, both professional and personal.

Now lying low, she's been taking tedious recovery jobs with a new ship, a new second-in-command, and a galactic government that has gone into hiding but is still on the hunt for her and her ship. But there are noises in the distant corners of the galaxy that the Asarla have found new allies and another way to come back from the great beyond. A painful and brutal way that will destroy worlds.

When what should have been an easy job with easy money backfires in her face, the cosmic conspiracy engulfs her again. The ghost--make that ghosts--of her dead lover appears, as do the deadly, long-gone Asarla who want their empire of worlds back, never mind that other beings live there. And Vas realizes lying low was never a possibility, not for the Warrior Wench, and never for her.

Death is final. Except when it isn't.
But the righteous in battle are always
VICTORIOUS DEAD.

"I'm a fantasy and science fiction novelist exploring worlds near and far. I live in Southern California and find that there are way too many people in my head than can ever be given their own books! I write because I have to just to let some of them out."