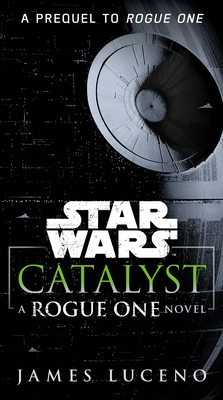 By James Luceno
$9.99
On Our Shelves Now

The newest release of the Star Wars canon, Catalyst sets up the events of the new "Rogue One" film. The story follows Jyn Erso's father Galen. A brilliant scientist, Galen's research has attracted the attention of Orson Krennic, a top member of Chancellor Palpatine's Death Star project. Determined to create a superweapon before their enemies can, Krennic enlists Galen to do his bidding. Trapped under his thumb, the Ersos must escape Krennic's plans in order to save themselves and the galaxy!

War is tearing the galaxy apart. For years the Republic and the Separatists have battled across the stars, each building more and more deadly technology in an attempt to win the war. As a member of Chancellor Palpatine’s top secret Death Star project, Orson Krennic is determined to develop a superweapon before the Republic’s enemies can. And an old friend of Krennic’s, the brilliant scientist Galen Erso, could be the key.

Galen’s energy-focused research has captured the attention of both Krennic and his foes, making the scientist a crucial pawn in the galactic conflict. But after Krennic rescues Galen, his wife, Lyra, and their young daughter, Jyn, from Separatist kidnappers, the Erso family is deeply in Krennic’s debt. Krennic then offers Galen an extraordinary opportunity: to continue his scientific studies with every resource put utterly at his disposal. While Galen and Lyra believe that his energy research will be used purely in altruistic ways, Krennic has other plans that will finally make the Death Star a reality. Trapped in their benefactor’s tightening grasp, the Ersos must untangle Krennic’s web of deception to save themselves and the galaxy itself.

James Luceno is the New York Times bestselling author of the Star Wars novels Tarkin, Darth Plagueis, Millennium Falcon, Dark Lord: The Rise of Darth Vader, Cloak of Deception, and Labyrinth of Evil, as well as the New Jedi Order novels Agents of Chaos I: Hero’s Trial and Agents of Chaos II: Jedi Eclipse, The Unifying Force, and the ebook “Darth Maul: Saboteur.”