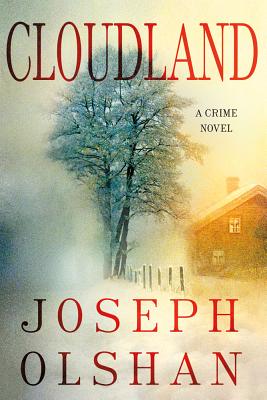 A stunning literary thriller set in rural Vermont from Joseph Olshan, the much praised author of Nightswimmer and Clara's Heart

Once a major reporter for a national newspaper, Catherine Winslow has retreated to the Upper Valley of Vermont to write a household hints column. While out walking during an early spring thaw, Catherine discovers the body of a woman leaning against an apple tree near her house. From the corpse's pink parka, Winslow recognizes her as the latest victim of a serial killer, a woman reported missing weeks before during a blizzard.

When her neighbor, a forensic psychiatrist, is pulled into the investigation, Catherine begins to discover some unexpected connections to the serial murders. One is that the murders might be based on a rare unfinished Wilkie Collins novel that is missing from her personal library. The other is her much younger lover from her failed affair has unexpectedly resurfaced and is trying to maneuver his way back into her affections.

Elegant, haunting and profoundly gripping, Cloudland is an ingenious psychological trap baited with murder, deception and the intricacies of desire.

Joseph Olshan is the award-winning author of eight novels. His first novel was Clara's Heart, which went on to be made into a film starring Whoopi Goldberg. His other novels include Nightswimmer and In Clara's Hands. In addition he has written extensively for newspapers and magazines and for several years was a professor of Creative Writing at New York University. He spends most of the year in Vermont.

“Joseph Olshan has stepped up and hit one for the home team. The bracing clarity of his prose…observes the destructive impact [the] killings have on this isolated region.” —Marilyn Stasio, New York Times Book Review

“Evocative… the intricate whodunnit has faint echoes of [Wilkie] Collins with Catherine in the role of his ‘Woman In White,' wandering desolate hills, but not trying nearly hard enough to escape her past.” —The Boston Globe

“CLOUDLAND is a lyrical love poem to that region (Vermont, New Hampshire) – its landscape, its weather, its people – and also to the writings of Wilkie Collins, whose Victorian-era writings helped lay the groundwork for the mystery genre.” —The Charlotte Observer

“The effect of violence on small communities is one of the most provocative themes for mystery fiction. Joseph Olshan expands that plot…[He] makes a bold and quite effective foray into crime fiction.” —Oline Cogdill, The Florida Sun Sentinel

“Olshan, has a reputation for writing beautifully….Cloudland is a love letter to Vermont.” —The Washington Independent Book Review

“In this refreshingly cliché-free serial-killer tale, Olshan tries his hand with a female narrator/heroine, whom he handles just as deftly as his sensitive male heroes. Although all these chilly, hurting souls are well worth your time, the real keeper is Catherine. Even as you wonder who the killer will turn out to be, you'll worry mainly about how she's going to come through all this.” —Kirkus Reviews

“Unlike the more common, adrenaline-fueled serial-killer thrillers, this is literary, character-driven fiction with remarkable empathy not only for those whom murder leaves behind but also for the perpetrator. Another fine performance from a critically acclaimed author.” —Booklist

“Rarely do you find a story with characters so fully developed that you feel as if they might live next door. Conjuring a distinctly 19th-century atmosphere, Olshan excels at crafting a Dickensian literary piece.” —Library Journal

“Olshan's writing is frequently stunning, particularily when he's describing the landscape of the book's Vermont setting, and he's crafted...a handful of interesting small town types...” —The A.V. Club (The Onion)

“Cloudland (Minotaur) is one of those books that grabs you by the neck and pulls you in, unrelenting and completely taking you..” —CrimeSpree Magazine

“CLOUDLAND, by Joseph Olshan, is obviously a crime novel and a great one at that….The book is not just about mystery – it is also about fascinating characters.” —The Hungry Reader

“This is a gripping crime novel, with a perfect ending, a surprise that doesn't come out of the blue, but fits the story. The isolated setting, and the story of the murdered women are vividly created in this book. Readers who are fans of S.J. Bolton's atmospheric thrillers should try Olshan's Cloudland. Cloudland isn't Olshan's first book. However, it's his first crime novel, and it's pitch perfect.” —Lesa's Critiques