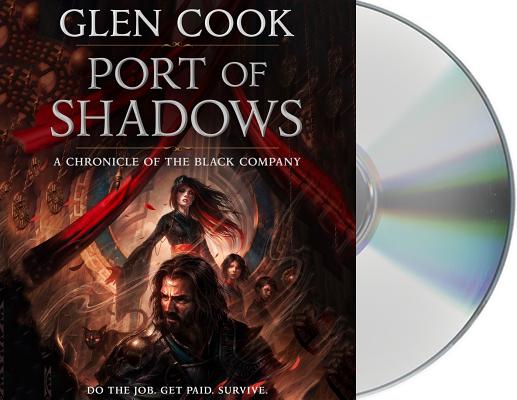 Port of Shadows is the newest dark fantasy audiobook in Glen Cook's esteemed Chronicles of the Black Company series.

The father of Grimdark returns…

The soldiers of the Black Company don’t ask questions, they get paid. But being “The Lady’s favored” is attracting the wrong kind of attention and has put a target on their backs, and the Company’s historian, Croaker, has the biggest target of all.

The one person who was taken into The Lady’s Tower and returned unchanged has earned the special interest of the court of sorcerers known as The Ten Who Were Taken. Now, he and the company are being asked to seek the aid of their newest member, Mischievous Rain, to break a rebel army. However, Croaker doesn’t trust any of the Taken, especially not ones that look so much like The Lady and her sister…

Born in 1944, Glen Cook grew up in northern California, served in the U.S. Navy, attended the University of Missouri, and was one of the earliest graduates of the well-known "Clarion" workshop SF writers. Since 1971 he has published a large number of Science Fiction and fantasy novels, including the "Dread Empire" series, the occult-detective "Garrett" novels, and the very popular "Black Company" sequence that began with the publication of The Black Company in 1984. Among his science fiction novels is A Passage at Arms.

After working many years for General Motors, Cook now writes full-time. He lives near St. Louis, Missouri, with his wife Carol.

"Cook provides a rich world of assorted races, cultures, and religions; his characters combine the mythic or exotic with the realistic, engaging in absorbing alliances, enmities, and double-crosses." —Publishers Weekly on Bleak Seasons