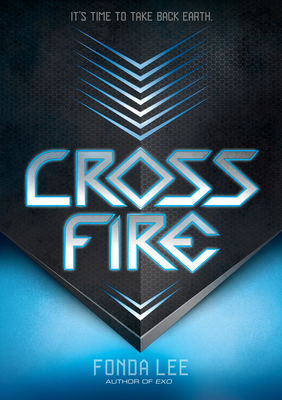 Earth's century of peace as a colony of an alien race has been shattered. As the government navigates peace talks with the human terrorist group Sapience, Donovan tries to put his life back together and return to his duty as a member of the security forces. But a new order comes from the home planet: withdraw. Earth has proven too costly and unstable to maintain as a colony, so the aliens, along with a small selection of humans, begin to make plans to leave. As word of the withdrawal spreads through the galaxy, suddenly Earth suddenly becomes vulnerable to a takeover from other aliens races. Invaders who do not seek to live in harmony with humans, but to ravage and destroy the planet.As a galactic invasion threatens, Donovan realizes that Sapience holds the key that could stop the impending war. Yet in order to save humankind, all species on Earth will have to work together, and Donovan might just have to make the ultimate sacrifice to convince them.

Fonda Lee is the author of Exo, which was a Junior Library Guild selection, and Zeroboxer, which was an Andre Norton Award finalist, a Junior Library Guild selection, and an ALA Top Ten Quick Pick for Reluctant Young Adult Readers. After spending years as a corporate strategist for Fortune 500 companies, she is now a writer and black belt martial artist living in Portland, Oregon. You can visit her online at www.fondalee.com.

Praise for Exo
"Fonda Lee's Exo is a deeply immersive story that balances fantastic, original world building with spine-tingling adventure. Days after finishing, I was still thinking about it." –Sabaa Tahir, author of the New York Times bestselling series An Ember in the Ashes
"Exo is my favorite type of sci-fi adventure–a novel that makes you question everything you think about our world . . . and what it means to be human." –Kass Morgan, author of the New York Times bestselling series The 100
"Believable, suspenseful science fiction." –Kirkus Reviews
"Science fiction fans will love this title." –VOYA
"Ethical questions add complex layers to this exciting sci-fi offering." –School Library Journal