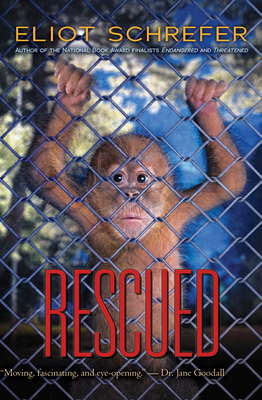 This is book number 3 in the Ape Quartet series.

Raja has been raised in captivity. Not behind the bars of a zoo, but within the confines of an American home. He was stolen when he was young to be someone's pet. Now he's grown up . . . and is about to be sent away again, to a place from which there will be no return.John grew up with Raja. The orangutan was his friend, his brother -- never his pet. But when John's parents split up and he moved across the country, he left Raja behind. Now Raja is suffering.There's one last chance to save Raja -- a chance that will force John to confront his fractured family and the captivity he's imposed on himself all of these years.Eliot Schrefer's last two novels, Endangered and Threatened, were both finalists for the National Book Award. With Rescued, he brings his remarkable storytelling to the American landscape, giving us a boy who must redefine his own humanity and an orangutan who will need his help in order to return home.

Eliot Schrefer's Endangered and Threatened were named as finalists for the National Book Award. He is also the author of Rescued, The Deadly Sister, The School for Dangerous Girls, Glamorous Disasters, and The New Kid. He lives in New York City. Visit him online at eliotschrefer.com.

Praise for Threatened:
A National Book Award finalist
*"Engrossing action and characters readers will keep thinking about in a splendid survival story." -- Kirkus Reviews, starred review
*"Gripping…Schrefer pulls no punches as he showcases the beauty and danger of both urban Gabon and the jungle." -- Publishers Weekly, starred review
"Fascinating and sure to lead to discussion." -- School Library Journal
"Schrefer's compassion and empathy for the people and chimpanzees and other animals of this part of Africa come through loud and clear." -- Horn Book
Praise for Endangered:
A National Book Award finalist
"Dazzling, big-hearted . . . As riveting as the action is, it's the nuanced portraits of the characters, human and ape, that make the story so deeply affecting." -- The New York Times Book Review
* "Schrefer spares no detail . . . This drama is clearly written from the heart." -- Publishers Weekly, starred review
"Taut, heart-wrenching." -- The Washington Post
"A poignant and moving story." -- School Library Journal