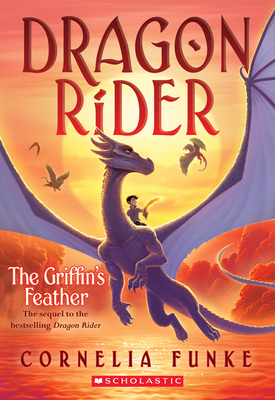 By Cornelia Funke
$9.99
On Our Shelves Now

It's now been two years since Ben and Firedrake defeated Nettlebrand and rescued the silver dragons. Both boy and dragon have finally found homes, but they must live hundreds of miles apart and can only see each other every once in a while.

During one such visit, news reaches Ben, the Greenblooms, and their friends that the last Pegasus in the world has been discovered. The legendary horse has three unhatched eggs with him, but the only way they'll ever hatch -- and continue the survival of this incredible magical species -- is to place them under a griffin's feather. But griffins are the most dangerous creatures in the world, and their mortal enemies are dragons...

Ben has vowed not to tell Firedrake about his quest, to protect him. But as he and the Greenbloom team set off for a remote island where the terrible griffins are rumored to live, he may just need the help of his best friend and dragon...

Cornelia Funke is the internationally acclaimed, bestselling author of The Thief Lord, Dragon Rider, and the Inkheart trilogy, along with many other chapter and picture books for younger readers. She lives in Los Angeles, California, in a house filled with books.

Praise for The Griffin's Feather:

"A richly imagined, adeptly illustrated adventure with a strong message of respect for all species of creatures." - Kirkus

"A not-to-be-missed fantasy by an author who is master of her craft." - School Library Journal

"Readers will delight in the creatures that turn up in this quest. Lively characters, hilarious banter." -- Publishers Weekly