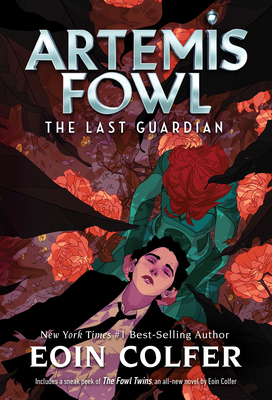 This is book number 8 in the Artemis Fowl series.

From New York Times best-selling author, Eoin Colfer, comes book eight in the Artemis Fowl series about a teenage criminal mastermind and his siege against dangerous, tech-savvy fairies.
Opal Koboi, the power-crazed pixie, is plotting to exterminate humankind and become fairy queen.
If she succeeds, the spirits of long-dead fairy warriors will rise from the earth, inhabit the nearest available bodies, and wreak mass destruction.
But what happens if those nearest bodies include animals, or two curious little boys named Myles and Beckett Fowl?
Can Artemis and Holly stop Opal and prevent the end of the world?
Don't miss the final book in the bestselling Artemis Fowl series, which inspired a movie on Disney+.

Eoin Colfer is the New York Times best-selling author of eight books in the Artemis Fowl series and well as Iron Man: The Gauntlet, the WARP trilogy, Airman, Half Moon Investigations, The Supernaturalist,Eoin Colfer's Legend of... books, The Wish List,Benny and Omar; and Benny and Babe. He lives in Dublin, Ireland with his wife and two sons.

"Will grab your interest, no matter what your age."—The New York Post

PRAISE FOR THE ARCTIC INCIDENT

"The world that Colfer creates is as vivid and fantastical as any shire, gotham, or galaxy far, far away in recent memory."—Entertainment Weekly

PRAISE FOR THE ETERNITY CODE

PRAISE FOR THE OPAL DECEPTION

PRAISE FOR THE LOST COLONY

"Fast-paced, funny, and wholly enjoyable, the book is an action-packed thrill ride."—VOYA

PRAISE FOR THE TIME PARADOX

"The author once again offers an exhilarating ride through the fantastical world of Artemis Fowl."—School Library Journal

PRAISE FOR THE ATLANTIS COMPLEX

"Colfer keeps the action moving with laughs and gadgetry. . .A treat for series fans."—Booklist