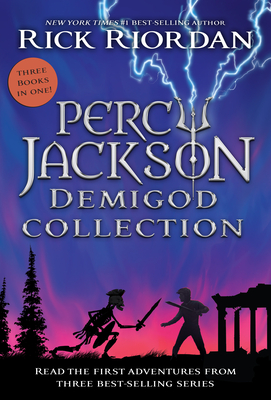 
A book of firsts! One epic collection containing the first book from three different New York Times #1 best-selling series by Rick Riordan. THE LIGHTNING THIEF: Zeus's master lightning bolt has been stolen and Percy Jackson is the prime suspect. He and his friends have ten days to find and return it and bring peace to a warring Mount Olympus. To succeed, Percy has come to terms with the father who abandoned him, solve the riddle of the Oracle that warns of betrayal by a friend, and unravel a treachery more powerful than the gods themselves. THE LOST HERO: Jason, Piper, and Leo find themselves at Camp Half-Blood where people won't stop talking about a curse and a camper named Percy who's gone AWOL.These three friends must rely on one another and their newfound demigod gifts as they embark on an epic quest to save Mount Olympus. THE HIDDEN ORACLE: Apollo, once the glorious god of the sun, music, and poetry, has been cast down to Earth in punishment by Zeus. Now, as awkward mortal teenager Lester Papadopoulos, he's been tasked with restoring five Oracles that have gone dark in order to regain his place on Mount Olympus. How is he supposed to accomplish that without any godly powers? He needs help, and a demigod named Percy Jackson shows him where to find it: at a training camp on Long Island called Camp Half-Blood. This primer of heroes and demigods will start readers on three unforgettable adventures. Bonus first chapters from two other amazing series promise more exciting journeys.

Rick Riordan, dubbed "storyteller of the gods" by Publishers Weekly, is the author of five #1 New York Times best-selling middle grade series with millions of copies sold throughout the world: Percy Jackson and the Olympians, The Heroes of Olympus, and the Trials of Apollo, based on Greek and Roman mythology; the Kane Chronicles, based on Ancient Egyptian mythology; and Magnus Chase and the Gods of Asgard, based on Norse mythology. Rick collaborated with illustrator John Rocco on two #1 New York Times best-selling collections of Greek myths for the whole family: Percy Jackson's Greek Gods and Percy Jackson's Greek Heroes. Rick is also the publisher of an imprint at Disney-Hyperion, Rick Riordan Presents, dedicated to finding other authors of highly entertaining fiction based on world cultures and mythologies. He lives in Boston, Massachusetts with his wife and two sons. Follow him on Twitter at @camphalfblood.