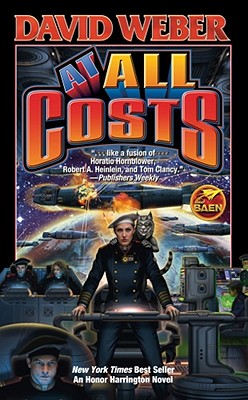 
What price victory? The war with the Republic of Haven has resumed . . . disastrously for the Star Kingdom of Manticore. Admiral Lady Dame Honor Harrington, Steadholder and Duchess Harrington, the single victorious Allied commander of the opening phase of the new war, has been recalled from the Sidemore System to command Eighth Fleet. Everyone knows Eighth Fleet is the Alliance's primary offensive command, which makes it the natural assignment for the woman the media calls “the Salamander.” But what most of the public DOESN'T know is that not only are the Star Kingdom and its Allies badly outnumbered by the Republic's new fleet, but that the odds are going to get steadily worse. Eighth Fleet's job is to somehow prevent those odds from crushing the Alliance before the Star Kingdom can regain its strategic balance. It's a job which won't be done cheaply. Honor Harrington must meet her formidable responsibilities with inferior forces even as she copes with tumultuous changes in her personal and public life. The alternative to victory is total defeat, yet this time the COST of victory will be agonizingly high.

David Weber is the science fiction phenomenon of the decade. His popular Honor Harrington novels are New York Times best sellers and can’t come out fast enough for his devoted readers. In addition to the Honor Harrington series, he has written many top-selling science fiction novels, all for Baen, including Empire from the Ashes, The Apocalypse Troll, and In Fury Born. He has also begun a top-selling epic SF adventure series in collaboration with John Ringo, with four novels so far: March Upcountry, March to the Sea, March to the Stars and We Few. His Wind Rider’s Oath, another New York Times best seller, continues his popular Bahzell fantasy adventure series.