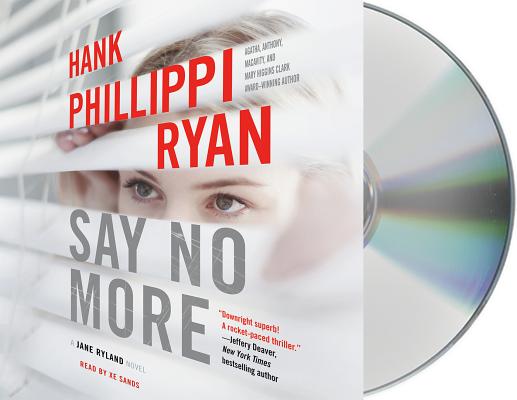 This is book number 5 in the Jane Ryland series.

When Boston reporter Jane Ryland reports a hit and run, she soon learns she saw more than a car crash—she witnessed the collapse of an alibi. Working on an expose of sexual assaults on college campuses for the station’s new documentary unit, Jane’s just convinced a date rape victim to reveal her heartbreaking experience on camera. However, a disturbing anonymous message—SAY NO MORE—has Jane really and truly scared.

Homicide detective Jake Brogan is on the hunt for the murderer of Avery Morgan, a hot-shot Hollywood screenwriter. Her year as a college guest lecturer just ended at the bottom of her swimming pool in the tight-knit and tight-lipped Boston community called The Reserve. As Jake chips his way through a code of silence as shatterproof as any street gang, he’ll learn that one newcomer to the neighborhood may have a secret of her own.

A young woman faces a life-changing decision—should she go public about her assault? Jane and Jake—now semi-secretly engaged and beginning to reveal their relationship to the world—are both on a quest for answers as they try to balance the consequences of the truth.

"Ryan uses a complex, multifaceted plot to deliver an unflinching look at college sexual assault and examine the “hard line between journalism and law enforcement.” The tension mounts as the action builds to a conclusion that thrills and gratifies. " - Publishers Weekly