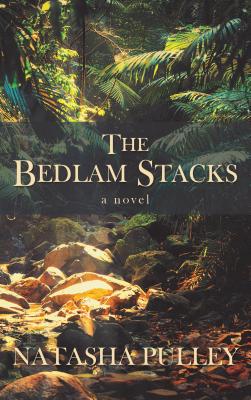 “The Bedlam Stacks is a gorgeously detailed historical fantasy novel that spans from England to China to Peru. The year is 1859, and Merrick Tremayne is enlisted by his former employer, the East India Trading Company, to smuggle ingredients for a crucial malaria treatment past the monopoly holders in Peru. Along the way, his story slips into fantasy as easily as sliding into warm water. Though Merrick begins his trip loyal only to the Company, his loyalties shift the longer he's away. Richly described and quietly romantic, this book is an absorbing and beautiful read.”
— Lillian Tschudi-Campbell, The Red Balloon Bookshop, Saint Paul, MN

The eagerly anticipated new novel from the author of THE WATCHMAKER OF FILIGREE STREET--a treacherous quest in the magical landscape of nineteenth-century Peru.

In 1859, ex-East India Company smuggler Merrick Tremayne is trapped at home in Cornwall after sustaining an injury that almost cost him his leg. On the sprawling, crumbling grounds of the old house, something is wrong; a statue moves, his grandfather's pines explode, and his brother accuses him of madness.

When the India Office recruits Merrick for an expedition to fetch quinine--essential for the treatment of malaria--from deep within Peru, he knows it's a terrible idea. Nearly every able-bodied expeditionary who's made the attempt has died, and he can barely walk. But Merrick is desperate to escape everything at home, so he sets off, against his better judgment, for a tiny mission colony on the edge of the Amazon where a salt line on the ground separates town from forest. Anyone who crosses is killed by something that watches from the trees, but somewhere beyond the salt are the quinine woods, and the way around is blocked.

Surrounded by local stories of lost time, cursed woods, and living rock, Merrick must separate truth from fairytale and find out what befell the last expeditions; why the villagers are forbidden to go into the forest; and what is happening to Raphael, the young priest who seems to have known Merrick's grandfather, who visited Peru many decades before. The Bedlam Stacks is the story of a profound friendship that grows in a place that seems just this side of magical.

Natasha Pulley, the author of The Watchmaker of Filigree Street, studied English literature at Oxford University and earned a creative writing M.A. at the University of East Anglia. She lives near Ely in Cambridgeshire, England.