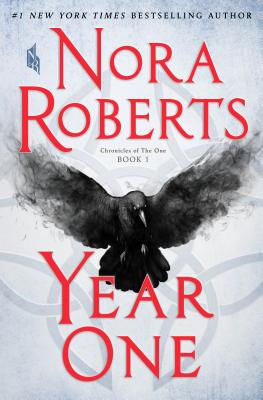 “This new novel from legendary romance author Nora Roberts feels entirely fresh and utterly compelling. A plague that starts on a small farm manages to destroy almost the entire human population on Earth, and those who are left find themselves changed - some for better, some for worse. The scattered bits of humanity that remain struggle to fight the chaos that descends, as some characters - Lana and Max, Arlys and Fred, and Rachel and Jonah - find themselves immune to the plague. This fabulous departure from Roberts' usual storytelling is refreshing and compulsively readable!”
— Annie Carl, The Neverending Bookshop, Bothell, WA

“Nora Roberts steps away from romance to give us an absolutely devastating story of global cataclysm. A new disease has rapidly infected most of the world, leaving behind survivors who exhibit mysterious—and dangerous—new abilities. I read this in one sitting, on the edge of tears at all times as I moved through every emotion. Although Year One chronicles the near-extinction of mankind, the story is one of rebirth and the persistence of hope, rather than despair. I’ll be counting the days until the next book in the series releases!”
— McKenzie Workman, Powell's Books, Portland, OR