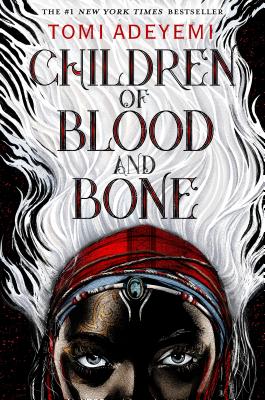 This is book number 1 in the Legacy of Orisha series.

"A sprawling fantasy teeming with deep and meaningful magic. One of the things I like most about this debut is that it raises very real and important issues of our time through multiple character's perspectives. No character is one-dimensional, and every character must learn from failure and introspection to become who they were meant to be." - Bookseller Kelly

Children of Blood and Bone, the first book in Tomi’s Legacy of Orisha young adult fantasy trilogy, introduces readers to the West Africa-reminiscent kingdom and its once common, now persecuted minority magic wielders, the divîners. Tomi interweaves the point of view of divîner Zélie Adebola, who is both eager and fearful to embrace her heritage, and fanatically anti-maji King Saran’s offspring, Princess Amari who questions the established narrative, and Crown Prince Inan, torn between fulfilling his father’s expectations and determining his own values. At times as graphically brutal as it is compelling, this stellar new fantasy will have an enduring legacy. Highly recommended.

“When Zelie was a child, she saw her mother and all magic wiped from existence with a tyrant's single, sweeping order. Now she finds herself tasked with restoring that magic to the land of Orisha, with the aid of her brother and that same tyrant's daughter. As Zelie races against time, she reckons with her newfound abilities and the moral complexities they awaken her to. Adeyemi's debut features truly epic world-building without sacrificing the intimate character development that propels the narrative. Every action combines taut pacing with lucid internal monologue, lending each work of magic or physical blow a palpable emotional weight. Stunning, cinematic, and resonant.”
— Bill Grace, Buttonwood Books & Toys, Cohasset, MA

Tomi Adeyemi is a Nigerian-American writer and creative writing coach based in San Diego, California. After graduating Harvard University with an honors degree in English literature, she studied West African mythology and culture in Salvador, Brazil. She is the author of Children of Blood and Bone.