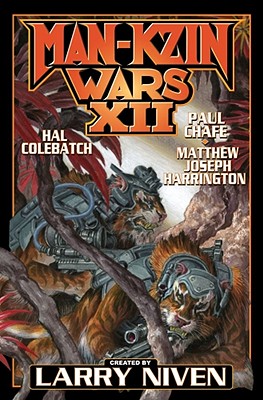 By Larry Niven (Created by)
Email or call for price.
Hard to Find

This is book number 12 in the Man-Kzin Wars series.

First Time in Paperback. Kzin and Human Clash Again in this All-New Report from the Frontlines of the Top Selling Space War in Science Fiction. The kzin, formerly invincible conquerors of all they encountered, had a hard time dealing with their ignominious defeat by the leaf-eating humans. Some secretly hatched schemes for a rematch, others concentrated on gathering power within the kzin hierarchy, and some shamefully cooperated with the contemptible humans, though often for hidden motives. In war and in uneasy peace, kzin and humans continue their adventures, as told by Hal Colebatch, Paul Chafe, and Michael Joseph Harrington, expanding on the concepts created by New York Times best-selling writer Larry Niven.

Larry Niven has authored many New York Times bestsellers, both alone (The Integral Trees, The Ringworld Throne) and in collaboration with Jerry Pournelle (The Mote in God's Eye, Lucifer's Hammer, Footfall). His Known Space series, from which the highly successful Man-Kzin Wars books derive, is a landmark of modern science fiction, as popular as Heinlein's Future History series and Asimov's Foundation series. When Arthur C. Clarke appeared on a talk show and was asked to name his favorite science fiction writer, he immediately answered "Larry Niven." Winner of a Nebula award and five Hugo awards, Niven is among the foremost SF writers of the new century.