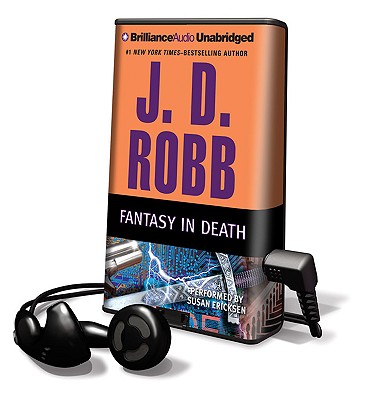 Bart Minnock, founder of the computer gaming giant U-Play, enters his private playroom, and eagerly cant wait to lose himself in an imaginary world, to play the role of a sword-wielding warrior king, in his companys latest top-secret project, Fantastical. The next morning, he is found in the same locked room, in a pool of blood, his head separated from his body. It is the most puzzling case Eve Dallas has ever faced, and it is not a game Lt. Eve Dallas is having as much trouble figuring out how Bart Minnock was murdered as who did the murdering. The victims girlfriend seems sincerely grief-stricken, and his quirky-but-brilliant partners at U-Play appear shocked as well. No one seemed to have a problem with the enthusiastic, high-spirited millionaire of course, success can attract jealousy, and gaming, like any business, has its fierce rivalries and dirty tricksas Eves husband, Roarke, one of U-Plays competitors, knows well. But Minnock was not nave, and he knew how to fight back in the real world as well as the virtual one. Eve and her team are about to enter the next level of police work, in a world where fantasy is the ultimate seductionand the price of defeat is death.