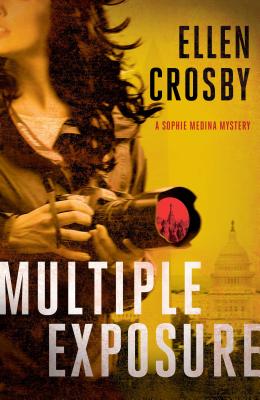 By Ellen Crosby
Unavailable to Order
Hard to Find

introduces readers to London-based news service photographer Sophie Medina. Her
undercover CIA agent husband, Nicholas Canning, is missing and she must find
the reason behind his apparent abduction. Sophie’s quest takes her from London
to Washington, D. C. and the collision of oil wells, Fabergé eggs and political
blackmail. While photographing an art exhibition, Sophie overhears
conversations that lead her in unsafe directions in her search for the truth.
Ride along with Sophie on her Vespa as she outpaces physical threats from a
Russian businessman and struggles with trust issues from the
not-very-forthcoming CIA. Is her husband dead or alive? For readers who enjoy
espionage mysteries with political overtones along with a touch of the art
world, this debut series is picture perfect for you.

From the author of the “lively and spirited” (The Providence Journal) wine country mysteries, comes the first in a new series featuring a savvy female photographer whose husband’s abduction embroils her in the world of international espionage and lost Romanov art treasures.

When photojournalist Sophie Medina returns to London from an overseas assignment, she discovers that her husband, Nick, a geologist and covert CIA operative, has been abducted. Three months later she is shocked when a friend in the British government says Nick has been spotted in Moscow and is not only a suspect in his boss’s murder but also potentially involved in illicit Russian oil deals. With her every step now closely watched, Sophie moves to Washington, D.C., to be with her family and friends.

There, Sophie is drawn deeper into Nick’s shadowy world. While photographing an exhibit of two never-before-seen Fabergé imperial eggs at the National Gallery of Art, Sophie is confronted by a Russian oil tycoon, implicating her husband in an international energy scheme. On the run from Nick’s enemies, Sophie plays a high-stakes game of Russian roulette as she tries to determine friend from foe and prove her husband’s innocence.

Weaving together political intrigue, art history, and international espionage, the fast-paced Multiple Exposure is the thrilling first installment in an exciting new series.

Ellen Crosby is the author of Multiple Exposure, the first book in a series featuring photojournalist Sophie Medina. She has also written six books in the Virginia wine country mystery series. A former freelance reporter for The Washington Post, Moscow correspondent for ABC Radio News, and an economist at the US Senate, Crosby lives in Virginia with her family. Learn more about her at EllenCrosby.com.

"Crosby introduces photojournalist Sophie Medina in this assured tale of love, loss, and secret agendas, the first in a new series, [which]...offers a complex portrait of our nation’s capital, with its historic beauty and roiling underbelly of deceit and danger."
— Publishers Weekly

“Multiple Exposure is a terrific, fast-paced mystery featuring a savvy photo-journalist, international intrigue, and the captivating world of D.C. wheeling and dealing. Ellen Crosby’s depiction of our nation’s capital is pitch perfect. Heroine Sophie Medina’s determination to solve the mystery her husband’s disappearance will captivate you from the first pages.”
— Allison Leotta

“Multiple Exposure is a gem of a novel. It's got everything you want from a thriller: Characters you love, a plot that is at once fascinating and startling, and settings that are so real you can smell them. This is Ellen Crosby at her very best!”
— John Gilstrap

"Ellen Crosby has segued from wine to international espionage without missing a beat. Her new book combines old-fashioned deduction with up-to-the-minute spycraft and gives us, in Sophie Medina, a doughty heroine who will be charming readers for years to come."
— Louis Bayard

“Ellen Crosby, author of the popular Virginia wine country mysteries, serves up a potent cocktail of suspense and international intrigue in her newest novel. Multiple Exposure will delight the author's many fans, and draw many new readers into an absorbing world of shadows and deceit.”
— Daniel Stashower

"This one is right up my alley --- Faberge eggs, Russians, and political intrigue --- all of which keeps you absolutely intrigued, ready for the gut punch. Ellen Crosby certainly has a talent for making the conventional wholly unconventional. You're going to enjoy this one."
— Steve Berry

"Fantastic! You are sucked in from the very beginning. With a globe-trotting mystery, a great heroine and a possible international scandal, the story will have you eagerly anticipating the next book." (4.5 stars)
— Jennifer Wilson

"Crosby seamlessly blends fact with fiction to establish a fast-paced mystery that is as creative as it is well researched. Readers looking for a lively, alluring mystery teeming with intellectual takeaways that become instant conversation starters will enjoy Multiple Exposure, as well as its spirited female lead, elements of Russian art history and international conspiracy."

“Can we say perfect timing? President Obama and Vladimir Putin seem to lurch from one confrontation to the next—Snowden, Syria, the Olympics—reminding us that detente is a thing of the past. Crosby manages to craft a mystery that, in some ways, is a throwback to those Cold War standoffs, yet is perfectly modern incorporating into the plot the battle for the earth’s resources, as well as independence for Russian territories. Along the way we learn Russian history, particularly about those fabulous Fabergé eggs whose workmanship remains a marvel.”