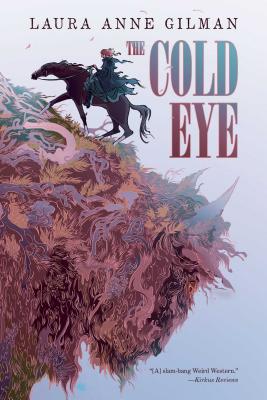 The Weird Wild West of The Territory reveals new challenges as Isobel grows into her role and responsibilities as The Devil’s Left Hand. Along with her mentor, Gabriel, she rides roads filled with natural and unnatural magic, Native and settler, magicians and deeper powers of the terrain – terrain where most inhabitants, like Isobel, have made a deal with the Devil. When a new natural / supernatural disaster with earth-shaking consequences manifests, it will test all she knows about her role and abilities. The sophomore installment in Laura Anne’s tale continues to give the sense not of a new story, but of a retelling of an established mythology of the American West.

In the anticipated sequel to Silver on the Road, which Kirkus Reviews calls a “slam-bang Weird Western,” Isobel is riding circuit through the Territory as the Devil's Left Hand. But when she responds to a natural disaster, she learns the limits of her power and the growing danger of something mysterious that is threatening not just her life, but the whole Territory.

Isobel is the left hand of the old man of the Territory, the Boss—better known as the Devil. Along with her mentor, Gabriel, she is traveling circuit through Flood to represent the power of the Devil and uphold the agreement he made with the people to protect them. Here in the Territory, magic exists—sometimes wild and perilous.

But there is a growing danger in the bones of the land that is killing livestock, threatening souls, and weakening the power of magic. In this second installment of the Devil’s West series, Isobel and Gabriel are in over their heads as they find what’s happening and try to stop the people behind it before it unravels the Territory.

Laura Anne Gilman is the author of the Locus bestsellers Silver on the Road and The Cold Eye, the popular Cosa Nostradamus books (the Retrievers and Paranormal Scene Investigations urban fantasy series), the Nebula award-nominated The Vineart War trilogy. Her first story collection is Dragon Virus, and she continues to write and sell short fiction in a variety of genres. Follow her at @LAGilman or LauraAnneGilman.net.

“[THE COLD EYE is] a fabulous coming-of-age tale of magic and power, set in a conflict-ridden alternative Wild West so vividly evoked that readers will be saddling up to ride along.”
— – Library Journal (starred review)

“It's like the 'Oregon Trail' of magical voodoo western novels. [The Cold Eye] feels less like make-believe and more like walking in the wilderness of half-forgotten American legends. With just a midnight whisper of violent truth.”
— -- NPR Books

“This series is one of my favorites. I had high expectations going into this book, and I’m pleased to announce that Gilman surpassed every single one of them. If you haven’t started this series yet, why not? It’s one of the best things in the genre right now. 5/5 stars.”
— -- Bookworm Blues

“Gilman crafts a fascinating vision of a magic-infested continent, set in
an unsettled and unpredictable time.”
— -- Publishers Weekly

“With The Cold Eye, Laura Anne Gilman magnificently continues to forge her own version of a Western, American myth of the very early days of a West that wasn’t, but, perhaps reading both Silver on the Road, and The Cold Eye, I wish it might have been.”
— -- – Skiffy and Fanty Reviews