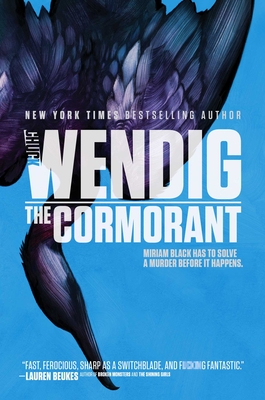 This is book number 3 in the Miriam Black series.

In the third installment of the suspenseful Miriam Black series, Miriam is on the road again, having transitioned from “thief” to “killer.” Miriam Black is being developed as a TV series on Starz with the producers of Breaking Bad.

Hired by a wealthy businessman, Miriam heads down to Florida to practice the one thing she’s good at: knowing when people are going to die. In her vision she sees the businessman murdered by another’s hand and on the wall written in blood is a message just for her:

Chuck Wendig is a novelist, screenwriter and game designer. He's the author of many published novels, including but not limited to: Blackbirds, The Blue Blazes, and the YA Heartland series. He is co-writer of the short film Pandemic and the Emmy-nominated digital narrative Collapsus. Wendig has contributed over two million words to the game industry. He is also well known for his profane-yet-practical advice to writers, which he dispenses at his blog, terribleminds.com, and through several popular e-books, including The Kick-Ass Writer, published by Writers Digest. He currently lives in the forests of Pennsyltucky with wife, tiny human, and red dog.