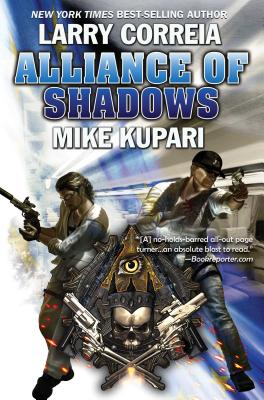 By Larry Correia, Mike Kupari
$8.79
On Our Shelves Now

This is book number 3 in the Dead Six series.

BOOK THREE IN THE COLLABORATION BETWEEN the creator of the multiple New York Times best-selling Monster Hunter series Larry Correia and the best-selling science fiction author Mike Kupari. The Dead Six series is an inventive and action-packed military adventure series with a touch of conspiracy and big dollop of descriptive firepower!

Europe has spiraled into chaos. A conspiracy years in the making combined with general unrest lead to upheaval and revolution. In the midst of the murderous disorder, mercenary Michael Valentine is in Europe with a small team of his Exodus personnel trying to track down the evil and highly dangerous Katarina Montalban. She has initiated a mysterious plot to do away with those who stand between her and ultimate power. The team is on their own, with few friends, few resources—and racing against the clock. Both Valentine and Lorenzo will have to risk some dangerous alliances if they're to succeed.

About Larry Correia:
“[A] no-holds-barred all-out page turner that is part science fiction, part horror, and an absolute blast to read.”—Bookreporter.com

About Mike Kupari's exciting SF adventure novel, Her Brother's Keeper:
"After cowriting Dead Six and Swords of Exodus with Larry ­Correia, Kupari makes his solo debut with this space opera that is bound to attract fans of Mike ­Shepherd’s Kris Longknife series or Elizabeth Moon’s Vatta’s War books. An excellent choice for both teen and adult sf readers."—Library Journal

About Larry Correia's Son of the Black Sword:
"This book has everything I like in fantasy: intense action scenes, evil in horrifying array, good struggling against the darkness, and most of all people—gorgeously flawed human beings faced with horrible moral choices that force them to question and change and grow."—Jim Butcher, creator of the New York Times best-selling Dresden Files

"Fans who like Correia’s fast-moving style will be pleased with the plethora of action scenes, and epic fantasy readers interested in delving into a new universe should be equally satisfied.  A solid choice for admirers of Brent Weeks and Brandon Sanderson’s Mistborn series."—Library Journal

"Correia is, above all, a storyteller, and he weaves a unique and entertaining tale.Without question, his action sequences pop on the page, his magic system has a nice wrinkle, and he has the foundations laid out for some excellent character growth as the series continues. . . . [A] definite hit."—Bookreporter

"The lore here is fascinating and well told. I enjoyed learning the history of the world and the legend of Ramrowan. The politics are just complicated enough to feel real without being too difficult to follow. Where the book truly shines, however, is in the characters. All are well drawn and distinctively voiced."—SFCrowsnest

Mike Kupari is the author of debut science fiction novel Her Brother's Keeper, as well as coauthor, with Larry Correia, of the best-selling Dead Six military adventure series including Dead Six, Swords of Exodus, and Alliance of Shadows. Mike grew up in Michigan’s Upper Peninsula and enlisted at the age of seventeen. Mike is recently returned from his second active duty overseas with the U.S. Air Force, where he was an Explosive Ordnance Disposal Technician in the US Air Force. Mike also served six years in the Army National Guard. He has worked as a security contractor with several firms, did a tour in Southwest Asia with a private military company, and is an NRA certified firearms instructor.