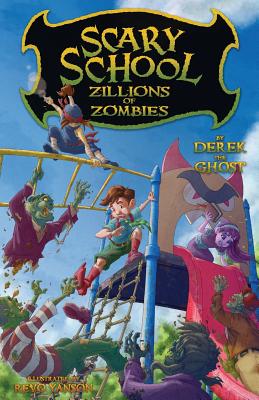 This is book number 4 in the Scary School (Paperback) series.

After defeating the fearsome Ice Dragon, the students of Scary School were in full celebration mode with an awesome parade leading up to the Dance of Destiny. But when a bearodactyl snatches Charles Nukid and flies him to Monster Kingdom, his friends have to figure out a way to rescue him before he's served as lunch to one of the kingdom's horrifying creatures. Little do his friends know that he's actually been taken there to be crowned the next monster king after defeating King Zog in battle. But no sooner is he crowned than he is challenged by Turlock the Troll. While trying to avoid getting crushed by Turlock's crew, one of them breaks the Zombie Control Lever, which was keeping all the zombies of the world good and not ravenous for brains. Charles's friends arrive in the nick of time after barely surviving a zombie attack at Scary School. Reunited, they now have to find the one unicorn in existence whose magic is powerful enough to turn all the zombies back to good before every monster and human alike are turned into the mindless brain-eating dead.