Death of a Bachelorette (A Jaine Austen Mystery #15) (Mass Market) 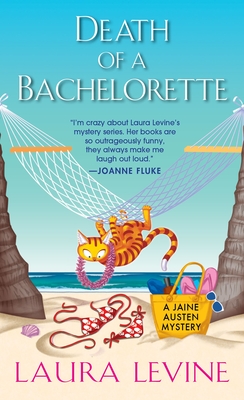 By Laura Levine
Email or call for price.
Backordered

This is book number 15 in the A Jaine Austen Mystery series.

Freelance writer Jaine Austen thought working for a knock-off reality show in the tropics would be paradise. But when she and her kitty Prozac find themselves trapped between a dimwitted leading man, catty contestants, and a cold-blooded murderer, the splashy gig becomes one deadly nightmare . . .

Jaine’s life has been a royal pain since she started penning dialogue for Some Day My Prince Will Come—a cheesy dating show that features bachelorettes competing for the heart of Spencer Dalworth VII, a very distant heir to the British throne. But when one of the finalists dies in a freak accident, it’s clear someone wanted the woman out of the race for good—and the police won’t allow a soul off the island until they seize the culprit. Terrified of existing another day without air conditioning and eager to return home, Jaine is throwing herself into the investigation. And she better pounce on clues quickly—or there won’t be any survivors left . . .