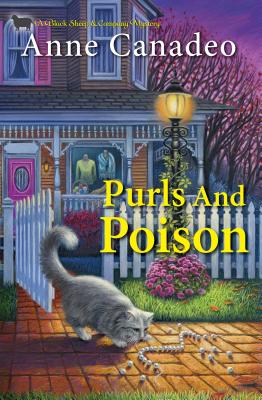 This is book number 2 in the A Black Sheep & Co. Mystery series.

When a fellow Black Sheep Knitter is suspected of poisoning her coworker, the group puts down their needles and takes up their friend's defense . . .

Suzanne Cavanaugh has just about had it with her office rival at Prestige Properties. It's bad enough that Liza Devereaux is constantly needling her at work, but when she shows up at one of Suzanne’s open houses to poach potential buyers, it’s the last straw. No one in the office fails to hear the two snarling at each other.

When Liza is later found dead in her office cubicle—poisoned by a diet shake—Suzanne becomes the prime suspect. It’s soon discovered, though, that Liza had double-crossed so many around town and stashed their dark secrets in her designer handbags that anyone could be the culprit.

The Black Sheep Knitters have no doubt their friend has been framed—but they need to prove it. Stirred to action, they get together to catch a sneaky killer who's trying to pull the wool over everyone's eyes . . .

Anne Canadeo is the bestselling author of more than thirty books, including her popular Black Sheep Knitting Mystery series and the Cape Light series, written as Katherine Spencer. She lives in Northport, N.Y. with her husband, daughter, and canine office assistant. You can contact her at anne@annecanadeo.com or follow her on Facebook.