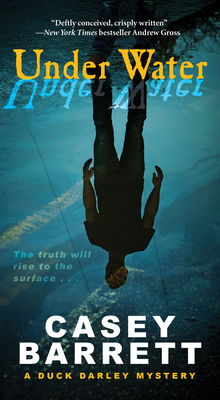 By Casey Barrett
Email or call for price.
Special Order

This is book number 1 in the A Duck Darley Novel series.

Once a competitive swimmer destined for Olympic gold, Duck Darley is now barely scraping by as an unlicensed PI, chasing down cheating spouses for the same Manhattan elite who once viewed him as equal . . .

Duck’s lost glory days resurface when he’s hired to track down the teenaged sister of a former teammate turned Olympic champion. Privileged Madeline McKay vanished over Labor Day weekend, leaving behind a too-perfect West Village apartment and a promising athletic career of her own. Duck thinks he’s hunting for a self-destructive runaway—until Madeline’s film student ex is savagely murdered, and the media spins her as the psycho who killed him.

As Duck searches for Madeline, he’s plunged back into the dark underbelly of Olympic swimming—a world rife with wild lies and terrible violence. And he soon learns that no matter how hard he tries to escape his past, demons still lurk beneath every surface . . .

“A novel that sparkles with wit, sass, and wonderful narrative style.”—Ken Bruen

“Deliciously lascivious and violent . . . the pull of his dark world will keep readers captivated to the last page.”—Kyle Mills

CASEY BARRETT is a Canadian Olympian and the co‑founder and co‑CEO of Imagine Swimming, New York City’s largest learn‑to‑swim school. He has won three Emmy awards and one Peabody award for his work on NBC’s broadcasts of the Olympic Games in 2000, 2004, 2006, and 2008. Casey lives in Manhattan and the Catskill mountains of New York with his wife, daughter, and hound. He can be found online at caseybarrettbooks.com.