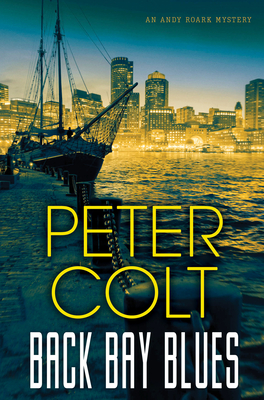 This is book number 2 in the An Andy Roark Mystery series.

1985, Boston. In Vietnam, Andy Roark witnessed death and horrifying destruction. But for the soldiers who made it back alive, there are other casualties of war—the loss of tenderness, trust, and connection. Still feeling adrift and unsettled, Andy has struck up a welcome friendship with Nguyen, a Vietnamese restaurant owner. Sipping beer and trading memories after the restaurant shutters, Andy gradually learns of the extraordinary lengths Nguyen took to flee Saigon shortly after its fall.

Andy’s latest case, too, has ties to Vietnam. His new client, a beautiful and enigmatic young Vietnamese woman, hires him to investigate her uncle’s murder. Andy discovers a connection to a group of refugees determined to overthrow the communist government. Led by the sinister Colonel Tran, the Committee is extorting local business owners to raise funds. The search for more answers takes Andy from Boston to Washington D.C. to San Francisco, and deep into a web of political and personal betrayal.

Somewhere near the heart of this mystery is a connection to Nguyen’s daring escape from Saigon. Decades may have passed, but sometimes the price of freedom twists allies into enemies, loyalties into betrayals, and truth into a web of lies . . .

Peter Colt is a currently a police officer in a small New England city where he has worked for the since 2007. He spent over twenty years in the Army reserve and was deployed to Kosovo in 2000, where he was attached to the Russian Army. He was deployed to Iraq in 2003 and again in 2008. He was fortunate to get to know many Vietnam vets and U.S. Army Special forces soldiers. He lived on Nantucket Island from 1973‑1986. He’s currently working on the next Andy Roark mystery.

Praise for Peter Colt and The Off-Islander

“Entertaining . . . Like Philip Marlowe—or Robert Parker’s Spenser—Andy has a sharp eye for telling detail and male haberdashery. Those who enjoy newish reworkings of classic PI tropes will be satisfied.”
—Publisher Weekly

“If you like your mysteries to be old-school in the vein of John D. MacDonald, or even farther back to Raymond Chandler or Dashiell Hammett, then you will appreciate this striking debut by Peter Colt. Long on atmosphere, detail, and character, it could place detective Andy Roark amongst the classic noir sleuths.”
—Raymond Benson, author of Blues in the Dark

“This atmospheric debut mystery should appeal to fans of the early works of Dennis Lehane and Robert B. Parker.”
—Library Journal

“By the end of the book . . . the reader has been taken for a long, exciting ride . . . We are told that this is not the last of the Andy Roark novels. I look forward to the next one.”
—Vietnam Veterans of America

“Readers yearning for a noir mystery in the vein of Mike Hammer or Sam Spade are in luck. Peter Colt has delivered just such a tale of intrigue. . . . Colt, an Army veteran who served in Kosovo and Iraq and now is a police officer in a small New England city, captures his firsthand, on-the-job experience in moody prose. The novel spends nearly as much time exploring Roark’s inner demons from the Vietnam War and life afterward as it does with the case at hand, adding a deeply evocative perspective to events.”
—Bookpage