A Long Walk to Water: Based on a True Story (MP3 CD) 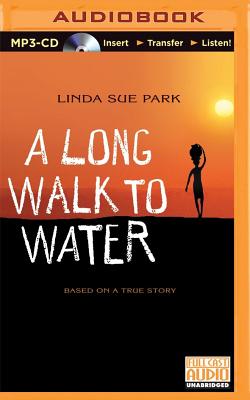 “Feel the heat, fear, and uncertainty as you walk with 11-year-old Salva, who, in 1985, is fleeing his homeland of Southern Sudan. Linda Sue Park has crafted a gripping story of a 'Lost Boy,' all the more remarkable because it is based on a true story. Intertwined with Salva's story is that of 11-year-old Nya, from a rival tribe in Southern Sudan. This 'long walk' will take readers into a troubled country, but a country still filled with hope due to people like Salva. This is a book for the reader who wants to look behind the headlines.”
— David Mallmann, Next Chapter Bookshop, Mequon, WI

In 1985, southern Sudan is ravaged by war. Rebels and government forces battle for control, with ordinary people--people like the boy, Salva Dut--caught in the middle. When Salva's village is attacked, he must embark on a harrowing journey that will propel him through horror and heartbreak, across a harsh desert, and into a strange new life.

Years later, in contemporary South Sudan, a girl named Nya must walk eight hours a day to fetch water. The walk is grueling, but there is unexpected hope.

How these two stories intersect is told in this fascinating dual narrative, performed by David Baker and Cynthia Bishop, with the assistance of dialect coach James Achueil...who actually made the same journey across Africa when he was one of the "Lost Boys of the Sudan." This true story is an amazing adventure with a wonderful conclusion. Great for classroom discussions, it is literature drawn from the real world