The Renegades of Pern (Dragonriders of Pern (Audio) #10) (Compact Disc) 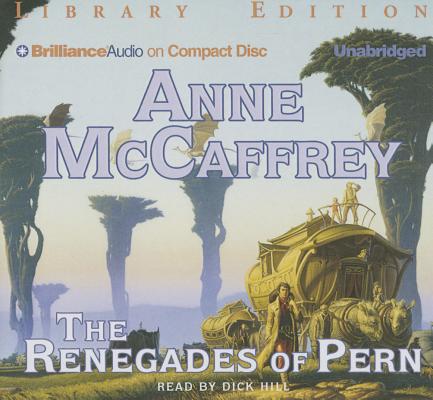 By Anne McCaffrey, Dick Hill (Read by)
Unavailable to Order
Hard to Find

This is book number 10 in the Dragonriders of Pern (Audio) series.

As long as the people of Pern could remember, the Holds had protected them from Thread, the deadly silver strands that fell from the sky and ravaged the land. In exchange for sanctuary in the huge stone fortresses, the people tithed to their lord Holders, who in turn supported the Weyrs, whose dragons were Pern's greatest weapon against Thread.

But not everyone on Pern was part of that system of mutual care and protection, particularly those who had been rendered holdless as punishment for wrongdoing. And there were some, like Jayge's trader clan, who simply preferred the freedom of the roads to the security of a hold. Others, like Aramina's family, had lost their holds through injustice and cruelty. For all the holdless, life was a constant struggle for survival.

Then, from the ranks of the criminals and the disaffected, rose a band of renegades, led by the Lady Thella. No one was safe from Thella's depredations, and now her quarry was Aramina, reputed to have a telepathic link with dragons. But when Thella mistakenly vented her rage on Jayge's family, she made a dangerous enemy. For Jayge was bent on revenge--and he would never let her have the girl who heard dragons