The Girl in the Moon (Paperback) 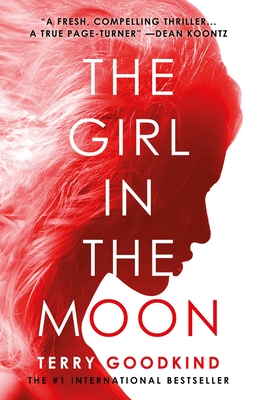 In this heart-pounding suspense novel set in the same world as Nest, #1 New York Times bestselling author Terry Goodkind introduces the world to his most unforgettable and deadly character yet.

When Angela was young, before she came to realize she had a rare ability, she was a rather ordinary girl. At least, that was what everyone said. But Angela is anything but ordinary. The daughter of a meth addict, she is convinced she was born a freak. Haunted by an abusive childhood, she was forced to become a woman far too soon. And in the process, she became more.

Angela Constantine has a secret life.

Angela juggles multiple jobs to live a secluded life in a cabin in the mountains. But she also lives a secret life, right under everyone’s noses. Because her family’s bloodline carries the ability to recognize killers, she adopts a solitary, violent existence in service of her own, personal mission in life. When Angela unexpectedly finds herself the prey of a group of international terrorists, she is the only one who knows the truth of what they are about to do. She might look like an unlikely hero. She might also be our only hope.

Angela Constantine is . . .The Girl in the Moon.

Terry Goodkind is a #1 New York Times bestselling author whose books have sold more than twenty-five million copies, and have been translated into more than twenty languages. Goodkind lives in southern Nevada.

Praise for The Girl in the Moon

“Terry Goodkind writes suspense with a slight fantastic edge, and the result is a fresh, compelling thriller. The Girl in the Moon contains concepts I wish had occurred to me. This is pure entertainment, a true page-turner, and great fun.”—Dean Koontz, New York Times bestselling author

Praise for Nest and Terry Goodkind